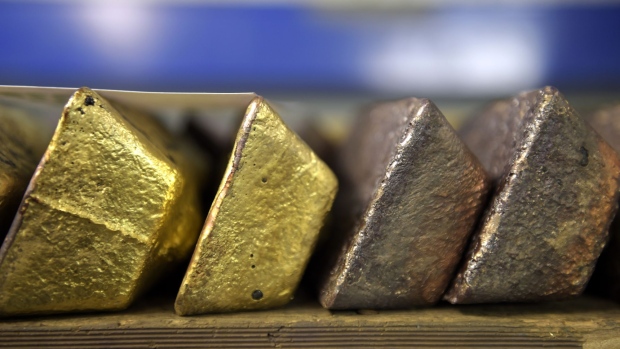 (Bloomberg) -- Gold dropped for a second day as concerns over the threat of a trading squeeze eased and investors digested the text of the U.S. stimulus bill.

Bullion had a fraught start to the week as logistical disruptions caused by the coronavirus pandemic led to a divergence of prices in New York and London, with traders worried about getting supply, although there are signs that the peak tightness may have eased for now.

Late on Tuesday, CME Group said it would rush the launch of a new gold futures contract under which 400-ounce bars would also be deliverable. The move offers a way to address the squeeze, if holders of Comex futures are willing to exchange for the new contract.

“Spreads are looking much better today,” Stephen Innes, chief global market strategist at AxiCorp Ltd., said in a note. “Lower spreads are always welcome in any market, especially in gold, when physical is especially tight with refiners shut down around the world.”

Gold’s been in the spotlight as the pandemic draws attention to the metal’s role as a haven in times of crisis, and how it’s become harder to trade between global markets as flights are grounded and refineries temporarily close.

Bullion investors are also weighing plans for massive stimulus worldwide, including unprecedented moves by the Federal Reserve to backstop large swaths of the financial system through unlimited quantitative easing. Goldman Sachs Group Inc. said gold’s probably at an inflection point and it is time to buy.

Meanwhile, Senate negotiators circulated what was labelled a final draft of the negotiated agreement, although the text may still not be the final deal, following intense talks on the $2 trillion aid package of spending and tax breaks.

Among the other main precious metals, silver declined 1.9% and platinum retreated 1.6%. Palladium was steady after a 21% jump on Wednesday, the most since 1997, as the prospect of mine shutdowns in South Africa raised concerns of a widening global deficit.