Gold fell the most in more than a week as better-than-expected U.S. jobs data reduced its demand as a safe haven.

Applications for state unemployment insurance unexpectedly plunged to a fresh pandemic low as the recovery gathers steam. Initial claims decreased by 39,000 to 547,000 in the week ended April 17, Labor Department data showed Thursday. Economists in a Bloomberg survey had forecast 610,000 in claims. 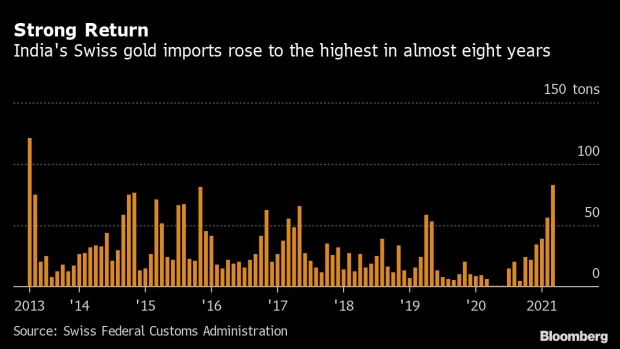 Still, renewed buying from India and China after a year on the sidelines could provide support for the precious metal going forward. India’s gold imports from Switzerland surged to highest in almost eight years in March as jewelry buyers took advantage of a dip in prices during the ongoing wedding season.

“These latest numbers certainly demonstrate the degree of pent-up demand in the country after the implosion in 2020,” Rhona O’Connell, an analyst at StoneX, wrote in a note.

To be sure, India’s gold-market revival is now “evaporating as a result of the rapid spread of the COVID virus,” she added. India posted the world’s biggest one-day jump in COVID-19 cases on Thursday.

China also boosted shipments from Europe’s premier gold-refining hub. Imports from Switzerland rose nearly fourfold to a seven-month high following the resumption of purchases in February. China’s central bank is approving imports of about 75 tons a month to meet domestic consumption, according to people familiar with the matter.

Silver and platinum declined, while the Bloomberg Dollar Spot Index rose 0.2 per cent. Spot palladium fell 1 per cent, after touching a record high of US$2,895.96 an ounce on Wednesday, as the economic rebound fueled expectations for increasing demand from automakers amid deepening supply shortfall.

The price of the metal used in catalytic converters in gasoline-powered vehicles is up 16 per cent in this year, building on a five-year rally. The bulk of this year’s gains have come since mid-March after flooding at Russian mines run by MMC Norilsk Nickel PJSC curbed output.