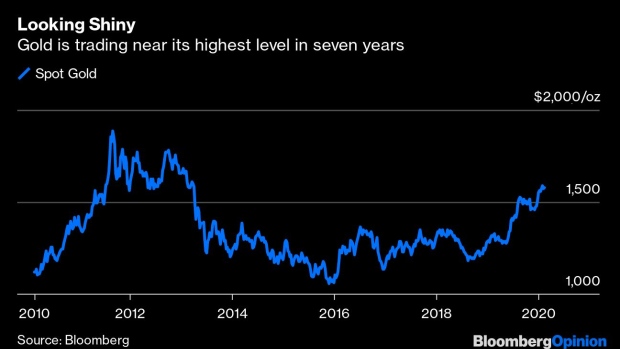 (Bloomberg Opinion) -- Bullion prices are at their highest in seven years, closing in on $1,600 an ounce. Gold held by exchange-traded funds is at all-time records and rising, thanks to worries over the economic damage inflicted by the coronavirus outbreak. Reserves, meanwhile, are depleting. It’s a heady mixture for miners, but perhaps not yet an intoxicating one.

Take Polyus PJSC, Russia’s largest gold digger. The $17 billion company said last week that it would pay down debt before beginning to spend seriously on its $2.5 billion Sukhoi Log project, set to add 1.6 million ounces a year to supply. That’s quite a statement. This is one of the world’s lowest-cost producers, generating plenty of cash, holding one of most impressive untapped resources globally, at a time of rising prices. The mine promises significant extra output for a company that aims to produce 2.8 million ounces this year.  Even so, Polyus is resisting the urge to fast-track, with a roughly two-year  “transitional period” of planning before it begins in 2023.

Granted, there are circumstances peculiar to Polyus that suggest conservative timing and financing is necessary. The miner is controlled by the son of Suleiman Kerimov, one of a handful of tycoons included in Washington’s 2018 sanctions list. A planned $900 million equity sale to Chinese conglomerate Fosun Group fell apart earlier that year, too. The project itself, meanwhile, is vast, and deep inside Russia, hardly a popular jurisdiction with foreign mining investors.

Polyus’s conservative approach is noteworthy, nonetheless. This is an industry that has in general become far more cautious with big-bang projects after a string of boom-time efforts a decade ago, begun in haste and regretted at leisure. Barrick Gold Corp.’s Pascua Lama in South America started in 2000 as a $1.2 billion project; by the time it was shelved in 2013, the estimated cost had soared to $8.5 billion. Polyus learned its own lessons at its Natalka mine. It was trapped by falling prices in 2013 and construction eventually paused, before resuming in 2016.

Certainly Sukhoi Log, first studied by Soviet geologists in the 1970s, comes with history and plenty of challenges. The size, at some 63 million ounces and as much of a quarter of Russia’s gold reserves, means it is the largest project on the industry’s horizon, by some way. For Polyus, it adds the equivalent of the annual output of its nearest rival, Polymetal International Plc. That gargantuan scale that leaves plenty of room for costs to spill over. There is processing to resolve, all on site, and transport logistics will be complex given the mine’s location. When I visited in 2012, the airport in the nearest settlement closed if it rained.

But the geology isn’t unfamiliar to Polyus, already operating nearby. It will use conventional processing. And the miner’s overall expenses are low by global standards. Its all-in sustaining cost was $594 per ounce in 2019, against Barrick’s $894. That’s a substantial margin even if bullion prices sink to the $1,050 used in Polyus’s Sukhoi Log calculations.

It’s all a far cry from the mood of the 2000s bull run, when gold shot up to $1,900 an ounce from $300 in just over a decade, and miners raced behind. The resulting value destruction was immense: Billions were spent on terrible projects and worse companies. A full 80% of the transaction value of the eight largest deals between 2001 and 2011 was impaired, according to a McKinsey & Co. study published last year. The industry’s return on capital between 2010 and 2016 was a pathetic 2.6%.

With the gold price trending higher after a couple of years around $1,200 to $1,300, deals have come back, and cashflows are helping exploration budgets rise. It’s notable that M&A discussions are beginning to build in prices closer to $1,500 than the $1,200 or so of recent years. It’s exuberance that hasn’t quite fed through to mega projects.

Polyus’s muddy knoll in bleak eastern Siberia has enough gold beneath it to rival behemoths like Grasberg, in Indonesia. As prices climb and buccaneering projects like Newcrest Mining Ltd. and Harmony Gold Mining Co.’s Wafi-Golpu in Papua New Guinea are  back in discussion, the question is whether Polyus sets a trend, or becomes the judicious exception.

To contact the author of this story: Clara Ferreira Marques at cferreirama@bloomberg.net