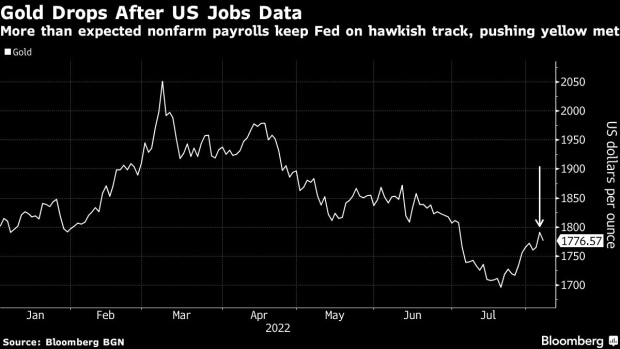 (Bloomberg) -- Gold dropped after US labor market data showed employers added more jobs in July than forecast, an indication the Federal Reserve may press on with steep interest-rate hikes to thwart inflation.

Still, bullion is now poised to end the week little changed, after earlier gains amid tension between China and US over US House speaker Nancy Pelosi’s visit to the Taiwan.

Bullion is headed for a third weekly gain, even as prices slipped on Friday, after China likely fired missiles over Taiwan during military drills. Beijing has responded aggressively to US House Speaker Nancy Pelosi’s visit to the island this week.

“Gold bulls didn’t get their green light from the jobs data with the outsized strong beat,” said Nicky Shiels, head of metals strategy at MKS PAMP SA. “Gold should remain capped below $1,800 for now, but attention will turn to the CPI.”

There were more signs that the fight to cool inflation will weigh on global growth. The Bank of England unleashed its biggest rate hike in 27 years on Thursday as it warned the UK is heading for more than a year of recession, while Cleveland Federal Reserve Bank President Loretta Mester said US interest rates need to be raised above 4%.

Spot gold dropped 0.9% to $1,775.62 an ounce at 1:41 pm in New York after earlier falling as much as 1.5%. Gold contracts on the Comex were down 0.9%. The Bloomberg Dollar Spot Index surged 0.6%. Silver fell as palladium gained and platinum was little changed.