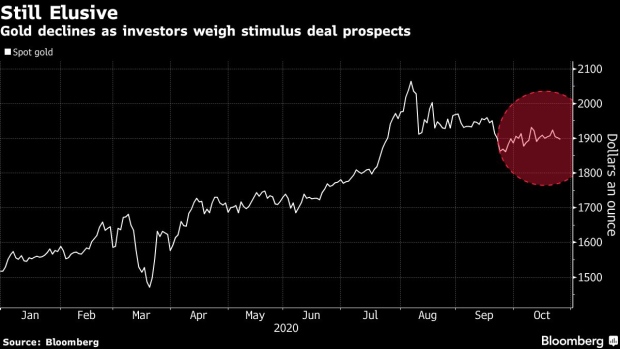 (Bloomberg) -- Gold declined to trade near $1,900 an ounce as investors weighed fading prospects for a U.S. stimulus deal, while the country reported record coronavirus infections for the second day in a row.

House Speaker Nancy Pelosi said the chamber could pass a plan this week, though a deal with the White House remains elusive and the Republican-led Senate might not act before the election. Speculation about a package has helped Treasury yields rise in recent weeks, dulling bullion’s allure.

“Gold is facing a bit of a headwind from the recent slight rise in real yields,” said Nicholas Frappell, global general manager at Sydney-based ABC Bullion. “Some investors are optimistic over the prospects for U.S. growth. Others are seeing positioning ahead of a Democratic win and assuming that the fiscal consequences will drive bond prices lower and yields higher.”

Separately, on the virus front, White House Chief of Staff Mark Meadows said the U.S. isn’t going to “control” the pandemic. The World Health Organization’s director general said some countries in the northern hemisphere are facing a “dangerous moment” as cases spike.