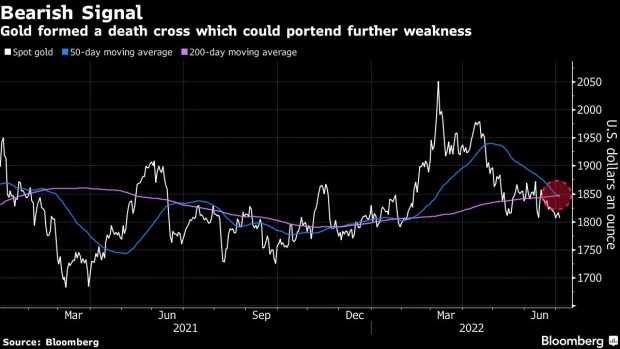 (Bloomberg) -- Gold dropped as Treasury yields rose and investors weighed the possible scrapping of some US tariffs on Chinese consumer goods that could help ease inflation.

Bullion fell as much as 0.5% in Asian trading, after rising by a similar amount over the previous two sessions. President Joe Biden may announce a rollback of some levies as soon as this week, people familiar with the deliberations said, although the timing could slip and a final decision made.

It would mark Biden’s first major policy step on trade ties with China and appears to be aimed at curbing inflation, which has spurred sharp rate hikes and damped the appeal of non-interest bearing gold. China’s Vice Premier Liu He discussed US tariffs in a call with Treasury Secretary Janet Yellen.

The precious metal has fallen for the last three months on rising interest rates, but is managing to hold above $1,800 an ounce amid fears of a recession that could boost its haven appeal. Still, prices have formed a so-called death cross pattern -- when the 50-day moving average drops below its 200-day counterpart -- which is a bearish signal for some traders.

The minutes of the Federal Reserve’s latest meeting due Wednesday will be parsed for clues on the central bank’s tightening path and whether it’s likely to hike by 50 or 75 basis points at its July 26-27 gathering.

Investors are likely to be on the sidelines until the Fed minutes and US nonfarm payrolls and unemployment data due Friday are out, said Brian Lan, managing director of Singapore-based dealer GoldSilver Central Pte.

“If the Biden administration does scrap some Trump-era tariffs on China goods, it will definitely be good news for consumers and inflation,” he said. This “could mean that the Fed will not need to do as much to rein in inflation if this is passed, and will be good for gold,” he said.