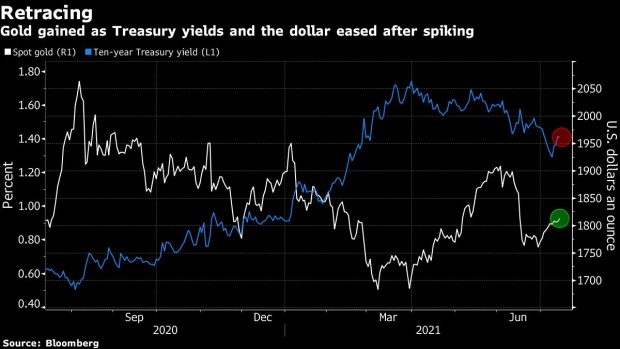 (Bloomberg) -- Gold edged higher as the dollar and Treasury yields pared some of their gains made in the wake of U.S. inflation data that came in significantly higher than expected.

Prices paid by U.S. consumers surged in June by the most since 2008, topping all forecasts and testing the Federal Reserve’s commitment to sticking with ultra-easy monetary support for the economy. The dollar and Treasury yields both spiked on the data released Tuesday, though eased on Wednesday to offer some support to gold.

Further cues on inflation will emerge with U.S. producer inflation numbers on Wednesday and retail sales data on Friday. Fed Chair Jerome Powell will also appear before the Senate Banking Committee on Thursday.

Gold is hovering above $1,800 an ounce, after posting its worst month since 2016 in June as the Fed brought forward its forecasts for rate hikes amid concerns about inflation. Investors are now keenly monitoring economic data on employment and price stability as they try to determine the pace at which policy makers will taper stimulus.

Although U.S. inflation expectations are supportive for gold as a hedge against rising prices, “concern that the Fed may increase interest rates earlier than expected, and which may boost yields and the dollar, held back gold from higher prices,” said Avtar Sandu, a senior manager for commodities at Phillip Futures Pte.