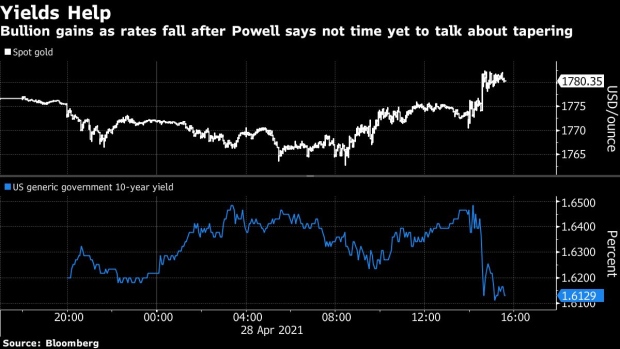 (Bloomberg) -- Gold advanced after the Federal Reserve Chairman Jerome Powell said it is “not time yet” to start conversations about slowing the pace of the central bank’s asset purchases.

Bullion rose to a session high as falling bond yields increased demand for the precious metal, which doesn’t offer interest. The dollar also declined. Powell, speaking Wednesday after the Fed’s two-day meeting, also said that it’s likely to take some time for substantial progress to be achieved in the economy.

Bullion has climbed from a nine-month low reached in March, posting three straight weekly gains as bond rates and the dollar waver. The Fed boosted its view of the economy and said the recent pickup in inflation is due to transitory factors. It left its key interest rate near zero and maintained a $120 billion monthly pace of asset purchases.

“In case there was any doubt, Powell articulated the equivalent of ‘READ MY LIPS, THERE’S NO TAPERING’ to silence the loose chatter that the Fed was going to ease off the gas,” Tai Wong, head of metals derivatives trading at BMO Capital Markets, said in an email. “It remains to been seen if there is enough momentum to drive gold through the top of the current range, but a strong close today is giving bulls some needed relief.”

After a record-breaking rally last year, gold lost momentum the first three months of 2021 amid optimism on reopening economies and vaccine rollouts, which fueled advances in the dollar and bond yields and dented demand for bullion as a haven.

The Fed said that “risks to the economic outlook remain,” softening previous language that referred to the virus posing “considerable risks.” The statement also noted that sectors hit hardest by the Covid-19 pandemic had “shown improvement.”