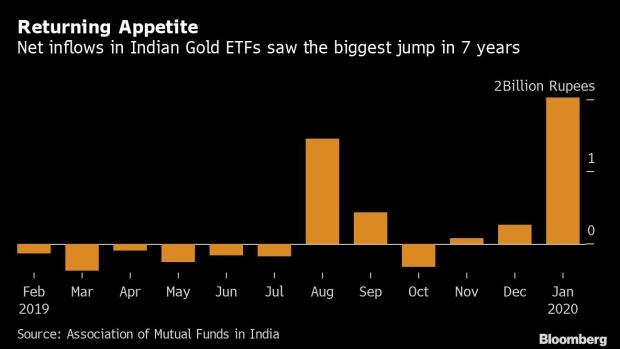 Gold bangles sit on display inside a Titan Co. Tanishq jewelry store during the festival of Dhanteras in Mumbai, India, on Friday, Oct. 25, 2019. Gold sales on the most auspicious day in India to buy the metal tumbled this year as high prices and concerns about an economic slowdown saw customers limit purchases. Photographer: Dhiraj Singh/Bloomberg , Bloomberg

(Bloomberg) -- Gold exchange-traded funds in India are popular again as risks to the global economy escalate even as jewelry sales languish in the world’s second-biggest consumer of the precious metal.

Indians invested the most in gold ETFs in more than seven years in January, boosting assets managed by the 11 funds selling the securities to 62 billion rupees ($870 million), according to the Association of Mutual Funds in India. While that’s 31% higher than a year earlier, it’s still about halve the 120-billion-rupee record touched in January 2013, the industry group’s data showed.

“These flows will continue for at least the next couple of years and assets will move toward the highs that were seen in 2013, if not surpass them,” said Chirag Mehta, a senior fund manager at Quantum Mutual Fund. “The volatility in equity markets and better returns from gold over the last year has driven people to gold.”

By contrast, gold imports halved in January, according to person familiar with government data, as physical demand remained lackluster on record high prices and a slowing economy. The price of the metal has outpaced India’s equity markets, rallying by almost a quarter in the past year, while the benchmark S&P BSE Sensex has risen 16%.

Overseas, bullion is trading near its highest level since 2013 as the spreading coronavirus outbreak in China threatens global economic growth and amid expectations that the U.S. Federal Reserve will keep interest rates low for some time. That’s even as holdings in global gold ETFs are near an all-time high amid the flight to haven assets.

“We see no dearth of risks, be it U.S.-China trade war issues, Brexit, slowing global growth, increasing income disparity, geopolitical tensions, and the struggle to revive growth in India,” said Vinit Sambre, head of equities at DSP Investment Managers Pvt., which oversees $7.5 billion in stocks. “One way to cover some of these would be to allocate some portion of assets to gold.”

To contact the editors responsible for this story: Phoebe Sedgman at psedgman2@bloomberg.net, ;Lianting Tu at ltu4@bloomberg.net, Margo Towie, Ravil Shirodkar