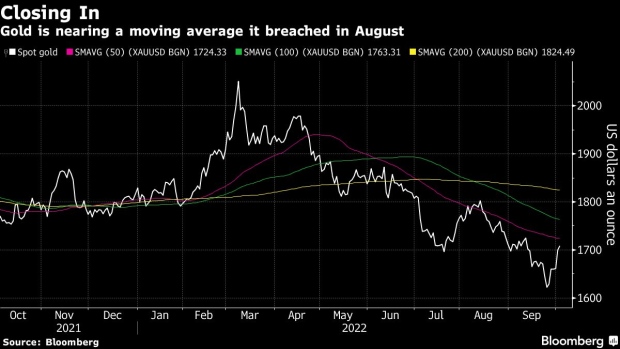 A worker displays gold bars stamped with the company signage at a gold and silver refinery operated by MMTC-PAMP India Pvt. Ltd., in Nuh, India, on Wednesday, Aug. 31, 2022. Gold held near its highest level in September 2022, as the dollar continued its retreat amid growing expectations that inflation may have peaked in the US. Photographer: Anindito Mukherjee/Bloomberg , Bloomberg

(Bloomberg) -- Gold extended an advance past $1,700 as weak US data drove a significant sentiment shift in the precious metals markets.

The metal is now closing in on its 50-day moving average after disappointing US economic prints fueled expectations that the Federal Reserve may put the brakes on its aggressive monetary tightening. US jobs openings fell more than expected in August to a more than one-year low, suggesting the labor market is cooling. On Monday, a US manufacturing gauge slumped more than expected.

Bullion prices have traded mostly below the technical marker since April, a sign of poor sentiment that saw bullion slump into a bear market. Now the metal is at a crucial juncture as traders await US nonfarm payrolls this week for more clues on the future path of central bank monetary policy. A weaker-than-expected print could further diminish rate hike expectations, bolstering the precious metal at a significant technical turning point.

Other US employment data including job openings and the ADP Research Institute’s figures will also be in focus this week. So far the Fed has struggled to weaken the labor market with tighter policy, a major part of its battle with decades-hot inflation.

Tighter central bank policy typically hurts gold by pushing up bond yields, making the non-yielding asset less attractive. Safe haven flows and expectations for more aggressive rate hikes in the US than elsewhere has also driven a rally in the dollar, which is negatively correlated with bullion.

“Risk aversion has eased and investors stopped being interested in the US dollar as safe haven,” Boele said. “Some Fed officials are already a bit less hawkish.”

Spot gold advanced 1.2% to $1,719.90 an ounce by 10:52 a.m. in New York, after earlier touching a three-week high. The Bloomberg Dollar Spot Index weakened 0.4%, following its 0.5% decline on Monday. Silver also added to its rally on Monday, when it jumped 8.8% as short-covering drove it through several key technical levels. Platinum and palladium gained.