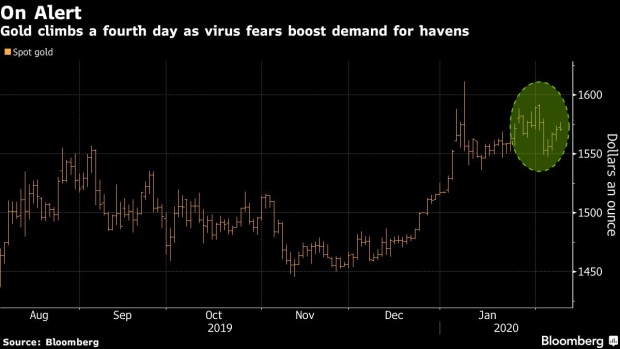 (Bloomberg) -- Gold climbed for a fourth straight day as investors weighed the unfolding coronavirus crisis, including a blunt warning from the head of the World Health Organization about the potential for more cases beyond China.

Prices rose as the global death toll from the outbreak topped 900 and the WHO Director-General Tedros Adhanom Ghebreyesus voiced concern over the spread from people with no travel history to China, saying “we may only be seeing the tip of the iceberg.” Beijing will spend at least $10 billion to fight the outbreak.

Bullion’s trading near the highest since 2013 as investors assess the impact of the disease on global growth and appetite for risk, although concerns over weaker physical demand for gold in China is capping gains. The effects of the virus have presented a “new risk” to the outlook, according to the Federal Reserve, and the issue will probably be front and center when Chairman Jerome Powell kicks off two days of Congressional testimony on Tuesday.

“All the way through, gold has received good support, and the fact that we’re once again seeing it bubble upward does suggest those concerns are increasing,” said Michael McCarthy, chief market strategist at CMC Markets.

Among other main precious metals, silver and platinum were up 0.2%. Palladium was little changed.