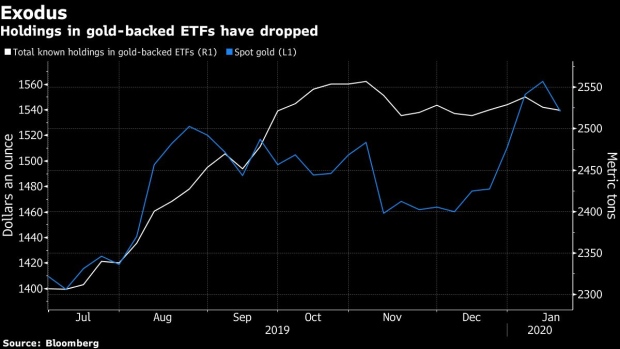 (Bloomberg) -- Gold sagged again as the soon-to-be signed Sino-American trade deal, release of decent monthly economic figures from China, and steady easing of tensions in the Middle East all combined to undermine the case for havens just as U.S. equities romped to records.

Bullion fell after the U.S. lifted its designation of China as a currency cheat, saying the nation has made “enforceable commitments” not to devalue and has agreed to publish exchange-rate information. That sets the scene for Wednesday’s high-level trade pact signing.

The rapid reversal in investing sentiment in recent days means that gold prices that had burst above $1,600 an ounce last week as the U.S.-Iranian standoff reached a crescendo, are now back in the $1,530s. The shift has been reflected in an outflow of holdings from exchange-traded funds, which shrank more than 20 tons over the four sessions to Monday.

“With such strong global growth sentiment evident in markets around the world, and a lack of geopolitical tensions to give support, gold’s price erosion is likely to continue,” said Jeffrey Halley, senior market analyst, Asia Pacific, at Oanda Corp. The recent rise “was driven entirely by the U.S.-Iran situation. With that out of the picture, for now, it is altogether feasible gold can continue to retrace to its rally starting point,” he said.

The renewed risk-on tone of the financial markets and a stronger dollar are weighing on gold, Australia & New Zealand Banking Group Ltd. said in a note. After the recent rally, investors have booked profit amid the easing of geopolitical tensions between Iran and the U.S., it said.