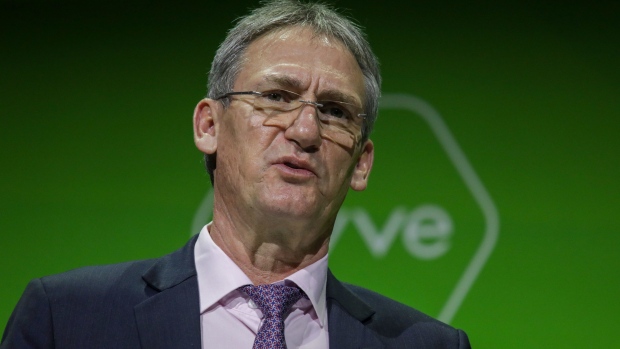 Chris Griffith, chief executive officer of Gold Fields Ltd., speaks on the opening day of the Investing in African Mining Indaba in Cape Town, South Africa, on Monday, May 9, 2022. Mining executives, investors and government ministers are meeting in Cape Town for the African Mining Indaba, the continent’s biggest gathering of one of its most vital industries. , Bloomberg

The company is considering buying mid-sized gold assets in Chile and Peru, or those that are slightly smaller than so-called tier-one assets, though no deals have been struck yet, according to CEO Chris Griffith. That could include producing mines with minimum annual production of 250,000 ounces or projects with long-term investment potential, he said.

It may also look for opportunities in Canada, though North American mines are expensive, he said.

Gold Fields, which has seen a turnaround at its giant South African mine start to pay off, is shifting focus to more profitable operations outside the country, and already has an asset each in Chile and Peru. In Chile, the new government is preparing proposals for raising mining taxes to fund greater social spending and close equality gaps, though much of that is directed at copper. Peru is also looking at the mining industry for raising more revenue for social spending.

“They are areas we like where we operate, and we are evaluating a number of opportunities that we think will fit our portfolio in those areas,” Griffith said in an interview in Cape Town. “We don’t want something that’s too small, but you know, again, the big tier-one assets are generally either very expensive or they are held by the majors.”

The Johannesburg-based producer plans to raise annual gold production by as much as a fifth to about 2.7 million ounces by around 2024, supported by its new Salares Norte project in Chile. Output is expected to start there in the first quarter of next year and reach more than 500,000 ounces a year by 2024, giving it tier-one status.

Adding more assets in countries like Chile and Peru may help lower costs, the CEO said. Gold Fields may be forced to process tailings at its Cerro Corona mine in Peru if it runs out of commercially viable deposits before the company secures new assets.

Still, populist rhetoric is a concern to investors, Griffith said.

Writers of a new constitution in Chile are in the final week of debating proposals that include restricting private property rights, as well as measures to give indigenous groups a bigger say in project approvals and boosting environmental protections. In Peru, some hard-line members of President Pedro Castillo’s party are calling for nationalization of mineral assets.

“That’s probably our biggest concern -- that we will likely see higher taxes and of course a little bit of concern around changing the constitution in Chile,” he said. “Yes, they’d push taxes, but overall they have been very good countries to operate in.”