Gold rose the most in two weeks after Federal Reserve Chairman Jerome Powell said tapering may be appropriate this year, easing concern that policy makers will soon tighten monetary policy.

The central bank could begin reducing its monthly bond purchases this year, though it won’t be in a hurry to begin raising interest rates thereafter, Powell said Friday in a virtual speech at the Kansas City Fed’s annual Jackson Hole symposium. The dollar and real Treasury yields sank as the Fed Chair spoke, allowing gold to gain past two of its main moving averages.

“Powell’s speech is slightly dovish but not dovish enough to jump start any large-scale buying in precious metals,” said Nicky Shiels, head of metals strategy at MKS (Switzerland) SA. “It was his strongest signal yet that the taper will begin this year (not next) and he didn’t fully capitalize on the risk of the delta variant on policy.” 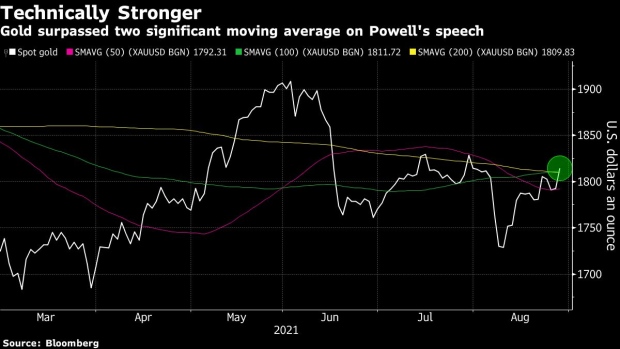 Powell’s much-anticipated speech eased prior concerns that the central bank will soon tighten monetary policy to combat inflation. A rapid increase in U.S. prices linked to snarled supply chains and shortages had raised the prospect of an early reduction in stimulus, which has cast a shadow over the gold market this month. The Fed Chair used his speech to reiterate his view that those pressures are temporary and confined to a narrow group of goods.

The metal has stumbled much of this year as vaccine rollouts, stronger-than-expected recoveries in some economies and worries over rising interest rates dimmed its appeal. Low rates helped power non-interest-bearing bullion to a record high last year on a wave of investor cash. In 2021, exchange-traded funds holding the metal have experienced outflows.

Attention will now turn to data on the strength of the U.S. labor market, which with inflation at target will likely determine the timing of tapering. The next non-farm payrolls report is due in a week, with a repeat of the substantial out-performance seen in August almost certain to hurt gold.

“I think we become very labor-market driven after initial position squaring,” said Marcus Garvey, head of metals strategy at Macquarie Group Ltd. “Given labor demand, that part will deliver, but it it naturally takes time.”

In base metals markets, aluminum climbed to its highest price since 2018 as Chinese authorities ordered fresh output curbs to rein in energy usage. Aluminum rose 1.2 per cent to US$2649.50 a metric ton, while copper added 1.2 per cent and nickel gained 1.3 per cent.