McCreath: The best days for gold are over

Gold climbed to the highest since February amid a retreat in bond yields and a report that top buyer China may import more of the metal.

After weeks trading in a narrow range, gold has advanced as Treasuries and the dollar head for weekly losses. Prices extended gains on Friday after Reuters reported that China has given banks permission to import a large amount of bullion to meet domestic demand, citing people familiar with the matter. About 150 tons will likely be shipped in the coming months, it said.

Chinese gold demand jumped at the start of the year as jewelry sales at big urban retailers more than doubled during the Lunar New Year holiday from a year earlier. Metals Focus forecast last month that the country’s gold jewelry demand will grow almost 30 per cent this year. 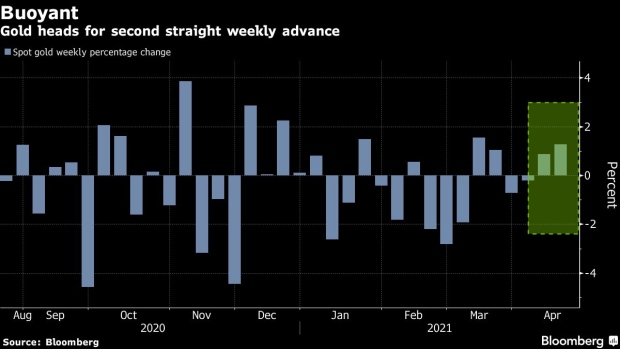 Traders are also keeping an eye on economic data, with the latest figures from the U.S. and China showing consumer spending boosting the recovery from the pandemic. As well as a retreat in bond yields, bullion was also supported after Federal Reserve Chairman Jerome Powell reiterated his dovish stance on monetary policy.

“The economic data published in the U.S. yesterday afternoon turned out for the most part to be significantly better than the market had anticipated,” Commerzbank AG analyst Daniel Briesemann said. “It seems that market participants believed the U.S. Federal Reserve’s assertion this time that it would not react to good data and would tolerate economic overheating.”

In other precious metals, silver rose 1 per cent, while platinum gained 0.6 per cent.

Palladium rose 0.4 per cent to US$2,751.25 an ounce, after reaching the highest in more than a year on Thursday. The metal, which reached a record of US$2,883.89 in February 2020, has benefited from stricter emissions rules that boost usage in autocatalysts.