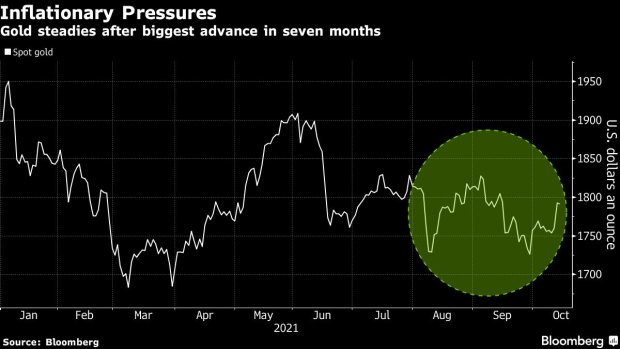 Freshly cast 12,5 kilogram gold ingots in the foundry at the JSC Krastsvetmet non-ferrous metals plant in Krasnoyarsk, Russia, on Monday, July 12, 2021. Gold headed for its second decline in three sessions as strength in the dollar and equities diminished demand for the metal as an alternative asset. Photographer: Andrey Rudakov/Bloomberg , Bloomberg

(Bloomberg) -- Gold steadied after its biggest advance in seven months as investors weighed concerns around stubbornly high inflation and the looming reduction in stimulus.

The U.S. consumer price index rose in September by more than forecast, resuming a faster pace of growth and underscoring the persistence of inflationary pressures in the economy. The yield on 10-year Treasuries fell after an initial increase following the data released Wednesday, boosting demand for non-interest-bearing bullion.

Meanwhile, minutes of last month’s Federal Reserve meeting showed that officials broadly agreed they should start tapering bond purchases in mid-November or mid-December amid increasing concern over inflation. The pandemic-era stimulus measures were one of the key pillars in bullion’s rally to a record last year.

“Gold might actually start catching a strong bid if high inflation persists, which is a big switch from earlier in the year where taper fears dominated inflation fears,” said John Feeney, business development manager at Sydney-based bullion dealer Guardian Gold Australia. “Historically, gold tends to perform very well in inflationary environments, so it makes sense for the market to turn bullish if inflation continues to beat.”

Spot gold steadied at $1,791.75 an ounce at 9:11 a.m. in Singapore, after advancing 1.9% Wednesday, the most since March 9. The Bloomberg Dollar Spot Index was little changed after dropping 0.5% in the previous session. Silver, platinum and palladium were all slightly lower.