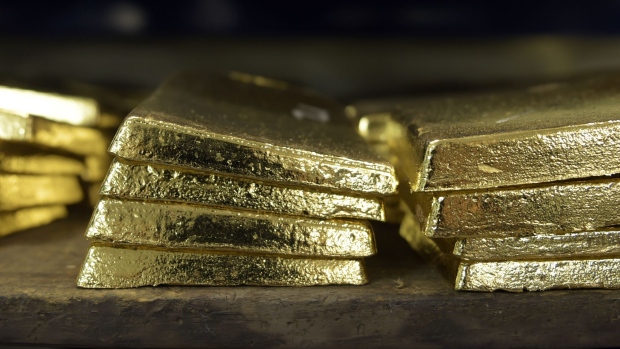 Gold anodes sit stacked in a vault at the Perth Mint Refinery, operated by Gold Corp., in Perth, Australia, on Thursday, Aug. 9, 2018. , Bloomberg

(Bloomberg) -- A group of investors including the hedge fund founded by billionaire John Paulson said “significantly mismanaged” gold companies could unlock $13 billion in value through mergers and cost cuts.

The Shareholders’ Gold Council of 18 investors including Egyptian billionaire Naguib Sawiris’s La Mancha found that the median spending of senior gold producers is double that of mining companies that produce other metals, including Vale SA, the world’s largest iron ore producer.

“The inescapable conclusion of our analysis is that gold producers are significantly mismanaged from a G&A perspective and that gold company boards need to do a better job holding management teams to account,” the council said. The potential to create more value is highest among mid-tier miners which were found to be “most inefficient” in managing costs.

The investors are looking to boost shareholder value in gold mining companies to capture the benefits from the precious metal’s meteoric rise to a six-year high. In the three years through Wednesday, the VanEck Vectors Gold Miners ETF has risen less than 5%, trailing the 13% rally in bullion.

About $2.5 billion of the combined profits of 47 gold companies the council tracked were spent on salaries and costs of head office management and boards, amounting to more than 10% of their aggregate market value, the council said in a report released Thursday.

The potential for cuts is greater among so-called mid-tier gold producers, report said. Their general and administrative spending amount to almost 13% of their earnings, according to the median of 23 miners reviewed in the report.

SGC urged the mid-tier companies to pursue no-premium mergers to cut duplicate corporate structures and achieve economies of scale. If the number of mid-tier companies were reduced by half, the council estimated that about $2.4 billion to $3.2 billion of value could potentially be unlocked.

Of the 12 senior gold producers it cited, Polymetal International Plc. and Kinross Gold Corp. had the highest spending -- 17.5% and 11% of their earnings before interest, taxes, depreciation and amortization, respectively, the council said. In the case of mid-tier companies, the biggest expenditure was posted by Golden Star Resources Ltd. at 33%, it said.

“Kinross regularly undertakes cost reviews, and earlier this year, we streamlined our leadership structure, which the simple analysis fails to take into account,” a representative for Kinross said in an emailed statement. “It is also worth highlighting that it is not an apples-to-apples comparison, as the report’s simple analysis notes itself that different companies calculate G&A differently.”

“Gold mining is simpler than other types of mining, including because of the fact that gold doré bars can be transported at very low costs by plane,” the council said. “Copper and iron ore producers have complex selling arrangements for different concentrates and blends as well as heavy trucking and rail needs to deliver final products in bulk size, necessitating higher G&A expenses.”

Other members of the council include John Hathaway, the general partner at Tocqueville Asset Management LP, and activist fund manager Livermore Partners.

To contact the reporter on this story: Vinicy Chan in New York at vchan91@bloomberg.net