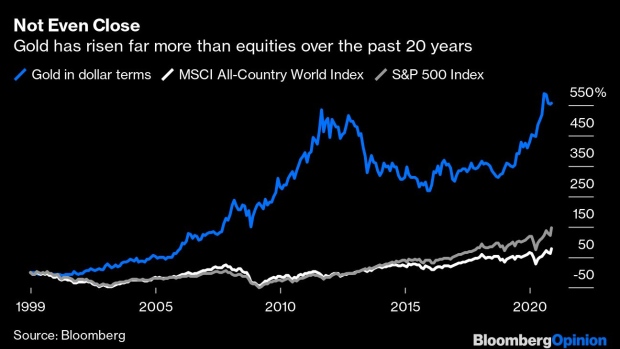 (Bloomberg Opinion) -- Investors don’t really have a handle on what gold is or what it represents. Many erroneously believe gold is some sort of inflation hedge, because of our experience in the 1970s. It’s also not a hedge against stock market crashes, as we discovered in March. Gold is a hedge on government authorities making poor economic choices. Inflation is usually the result of those poor decisions, but people confuse cause and effect here. Gold is a hedge on policy makers screwing up, and there has been a lot of screwing up in the last 20 years.

Gold has significantly outperformed stocks this century, gaining about 555% versus 79% for the MSCI All-Country World Index of stocks and 146% for the S&P 500 Index.(1) This is a direct result of significantly looser financial conditions, and no constraints on monetary and fiscal policy. From a financial perspective, the global economy is in a much worse place than 20 years ago, and there is no evidence that things are going to improve.

The year 2000 is of interest because financial conditions were very tight at the time. In the U.S., the target federal funds rate was 6.5%, real interest rates – or those after inflation - were strongly positive, the federal budget was balanced and the dollar was strong and getting stronger relative to other Group of 10 currencies. This was when the “strong dollar” doctrine preached by former Treasury Secretary Robert Rubin was still being pursued. A strong dollar increased the attractiveness of U.S. financial assets, especially Treasury securities, which helped to keep borrowing costs lower than they might be otherwise.

Financial conditions are much looser today. Interest rates are effectively zero (and negative after taking inflation into account), the Federal Reserve has bought a range of risky assets in the course of pumping some $3 trillion into the financial system this year as part of its quantitative easing policy, and the U.S. budget deficit is the widest ever at $3.1 trillion.

And of course, the Trump administration has been talking down the dollar for the purposes of increasing exports and manufacturing. True, the greenback is only back down to where it was in 2018 as measured by the Bloomberg Dollar Spot Index (which still makes it strong on a historical basis), but all currencies have depreciated a lot against gold and Bitcoin, which are supposed to be absolute stores of value.

The phrase “loose financial conditions” is a polite way of saying that the people in charge are lazy. The argument for low interest rates is simple: companies get to borrow more cheaply, encouraging them to spend more money on expanding plants and equipment and hire more workers. The argument for high interest rates are more nuanced. They’re good for savers, but they also discipline companies and governments to operate more efficiently and reduce debt, or else suffer higher interest expenses.

Likewise, the argument for a weak dollar is fairly straightforward: a cheaper currency allows U.S. goods to become more competitive overseas, boosting exports and manufacturing, which accelerates economic activity. The argument for a stronger dollar is more nuanced as well, in that a stronger dollar forces U.S. companies to make their goods more competitive or desirable in a global marketplace.

With the benefit of hindsight, the period where we had strong currencies and high interest rates look to be an aberration. There are few times in history when governments can resist the temptations of easy money and loose financial conditions. So, if investing in gold is a bet on authorities doing the wrong thing, the best way to diminish the allure of gold and put the gold speculators out of business is to run balanced budgets. You have to be pretty cynical to root for gold to go up, because it is an explicit bet on things getting worse.  (Full disclosure: I own gold).

Cynicism is abundant. Nobody really believes that any government official has the political will to reduce or eliminate the deficit, talk up the dollar or prod the Fed into a more hawkish composition. What I’m describing, of course, is fiscal conservatism at a time when both Democrats and Republicans have become more fiscally liberal. It’s worth pointing out that gold momentarily went up as the U.S. election results came in and it became apparent that Joe Biden would become the next president, even though a divided government (which seems probable) is the worst possible outcome for those betting on faster inflation. The market believes there will be deficit spending—and inflation—anyway.

In the 2010 movie Inception, the protagonist, Dom Cobb, played by Leonardo DiCaprio, says that “an idea is like a virus, highly contagious.” The idea that we can print or spend our way to prosperity is very seductive. It takes no effort. But it’s not how wealth is created. Wealth is created by individuals and businesses working for their own gain, to the benefit of society overall. The job of the government and the central bank are simply to create the conditions necessary for people to prosper. They are not doing a very good job at it, judging by the price of gold.