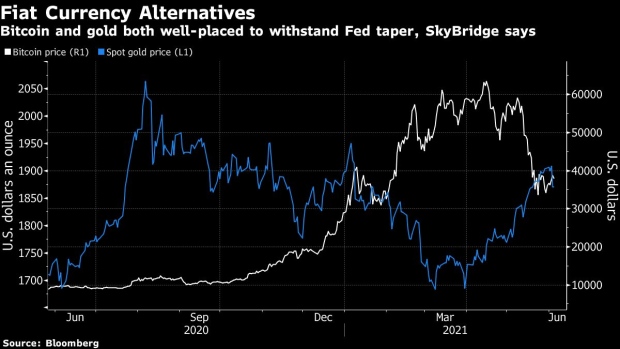 (Bloomberg) -- Gold will surge to fresh highs in the next year, but investors seeking currency alternatives as global debt balloons should look to Bitcoin, according to a $7.5 billion hedge fund.

Both are likely to rally even as the Federal Reserve moves to taper asset purchases, said Troy Gayeski, co-chief investment officer and senior portfolio manager at SkyBridge Capital. The two are frequently compared by investors, with former Treasury Secretary Lawrence Summers saying cryptocurrencies could stay a feature of global markets as something akin to digital gold.

“We’re going to stick to Bitcoin and crypto because we just think there’s more upside,” Gayeski said in a telephone interview last week. While there’s more volatility, “you’re going to capture a little bit more juice than you will in gold from that same phenomenon,” he added

Investors are tracking commentary by the U.S. central bank as inflation ticks higher and policy makers move closer to paring the huge asset purchases that rescued the economy from the turmoil caused by the pandemic. The monetary support has driven the Fed’s balance sheet to a record, while muscular fiscal spending has boosted government debt. Both may pose an eventual risk to the dollar’s value, potentially burnishing the appeal of alternatives.“All fiat-currency alternatives -- which have all gone through fairly recent substantial corrections -- are in a much better place now to handle that eventual taper and gradual slowing of money-supply growth, than they were as they were making higher-highs after higher-highs,” Gayeski said.

Both Bitcoin and gold have seen substantial swings this year, which unfolded amid a debate about whether the cryptocurrency was drawing demand away from bullion. The digital token soared to a record near $65,000 in April, before plunging. It was last around $36,000. Gold, meanwhile, came close to sinking into a bear market in March, but reversed course to erase year-to-date losses.

Leading Wall Street banks are divided on the relative merits of the pair -- Citigroup Inc. has said gold is “losing luster” to cryptocurrencies, while Goldman Sachs Group Inc. made the case that the two assets can coexist. Tesla Inc. boss Elon Musk, whose tweets have roiled Bitcoin prices this year, said in May he supports cryptocurrencies over fiat, or paper, currencies.

Bullion, which hit a record above $2,075 an ounce last year, has now established a floor, according to Gayeski. A lot of the taper talk concerns have been pulled out of the market, and even when it’s announced, the Fed is not going to start to reducing the pace of its purchases until 2022, he said.

“Going forward, the probability of gold continuing an uptrend is fairly high, making new highs over the next year,” he said.

Even as signs of recovery accumulate, the Fed is still buying $120 billion of Treasury and mortgage-backed securities a month, and its balance sheet has surged toward $8 trillion, about a third of gross domestic product. Talk on tapering that support -- which carries the potential to boost Treasury yields and the dollar, tarnishing gold’s appeal -- is moving closer.

SkyBridge, a fund-of-funds manager, has a small exposure to a gold miner that’s leveraged to a continued gold price rally. Its primary exposures are to U.S. cash-flow-generative strategies, backed by tangible assets, distressed corporate credit and convertible-bond arbitrage among others. The company’s Bitcoin fund is up 51.2% since its inception last December through to June 1.

SkyBridge founder Anthony Scaramucci has teamed up with First Trust Advisors on an exchange-traded fund that plans to buy and sell Bitcoin, and Gayeski expects the Securities and Exchange Commission to approve the product by the fourth quarter of 2021 or the first quarter of next year.

“The only reason we exist professionally is to find interesting ways to generate attractive non-correlated returns that also have an attractive risk-reward profile,” said Gayeski. “The mix of strategies in our broader portfolio is amplified by having a small-but-meaningful position in alternatives to fiat currencies like Bitcoin.”