Gold’s rally shows no signs of abating, with prices climbing afresh to a six-year high as cash keeps pouring into exchange-traded funds.

New U.S. sanctions on Iran added to uncertainty in global markets, bolstering gold’s appeal as a haven. Investors are also looking to the G-20 summit this weekend, where presidents Donald Trump and Xi Jinping are scheduled to meet to discuss U.S.-China trade. 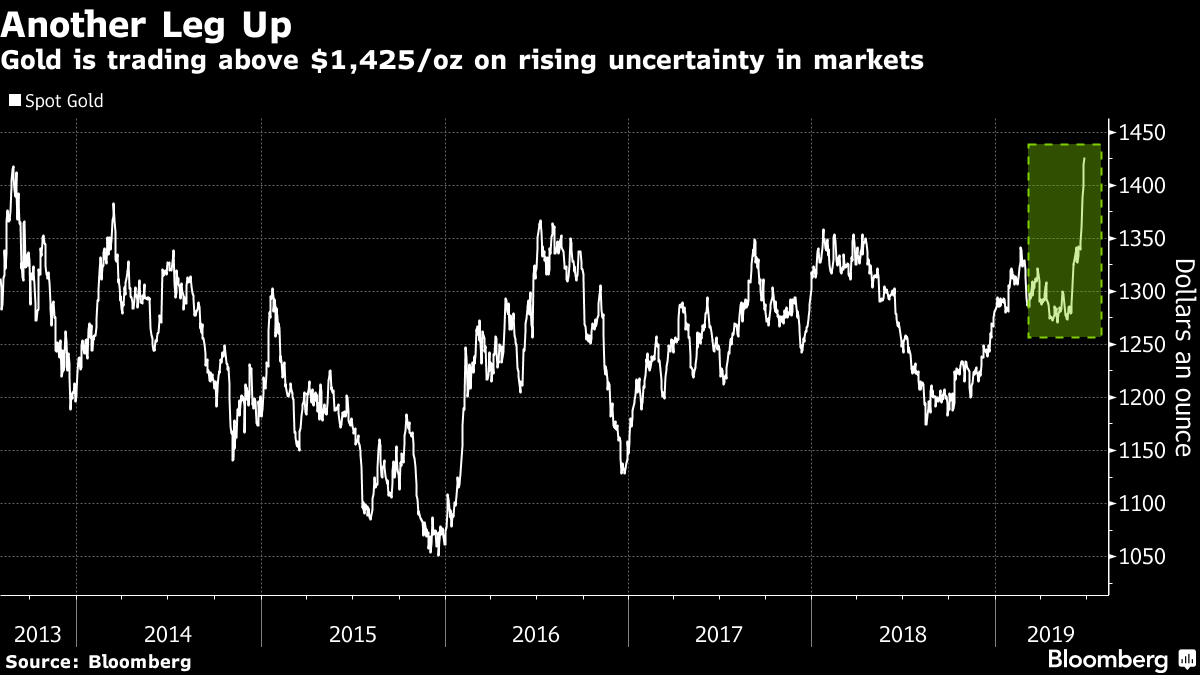 Bullion’s been on a tear this month as the dollar weakened after the Fed opened the door to a U.S. interest rate cut and other central banks also pivoted to a more dovish stance. Investors are taking note -- boosting net long positions in U.S. gold futures and options. ETFs have been on the rise, with the largest fund in the commodity space seeing record inflows at last week’s end. And buyers of gold jewelry, from Tiffanys to Rolexes, are joining the ranks of those benefiting from the rally.

In addition to the Fed’s stance on interest rates, the latest worsening of U.S.-Iran relations furthered the sharp rally in gold this week, “with the easier way out -- diplomacy -- now off the table, according to Iranian officials,” said Jingyi Pan, strategist at IG Asia Pte in Singapore. “The rise in gold prices into Tuesday had likely been a knee-jerk as the market ponders what could come next in this conflict.”

However, “the elephant in the room remains the U.S.-China trade talks and any deterioration into next week should shift us toward the resistance at US$1,480,” Pan said. “This may not be a one-way street either given the overbought situation, but amid the uncertainties, the market may be keen to buy any dips.”

Chinese officials this week said both sides need to be prepared to compromise for talks to succeed, but U.S. officials have so far maintained a hard line.

“The global capital market’s mood is shaky due to the fear of the unknowns, and it’s this uncertainty that will continue to provide the jet fuel for an already high-octane gold market,” Stephen Innes, managing partner at Vanguard Markets Pte, said in a note. A significant withdrawal by investors from the U.S. dollar, which intensified after last week’s Fed policy meeting, “further adds to the glimmering gold market appeal,” Innes said.

In other precious metals, silver declined on the Comex, palladium gained on the New York Mercantile Exchange, and platinum dipped. The gold/silver ratio widened to about 93, the most since 1992.

--With assistance from Swansy Afonso and Justina Vasquez.