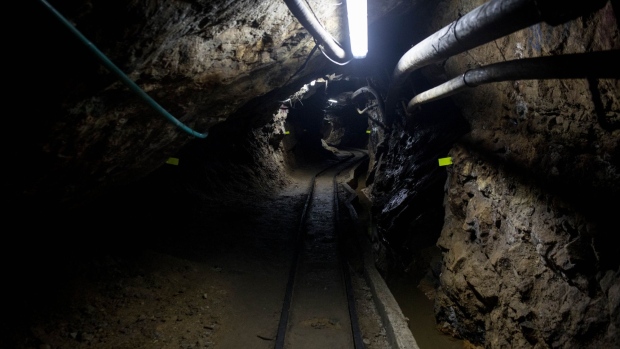 Lights and piping travel through a mine in Segovia, Colombia. , Bloomberg

Canadian miner Kinross Gold Corp. extended its production guidance, forecasting output will remain relatively stable for a decade as it develops key growth projects, including three in the Americas.

A month ago, Kinross announced guidance that projected boosting output over the next three years by about 20 per cent to 2.9 million gold-equivalent ounces. On Tuesday, the Toronto-based company extended its forecast through 2029, saying its production is expected to average 2.5 million over that 10-year period.

In an emailed statement, Kinross said four growth projects should help maintain production in coming years: the recently acquired Peak project in Alaska; the so-called Phase S extension at Round Mountain; the Lobo-Marte project in Chile; and Udinsk, the first deposit expected to be developed at the Chulbatkan project in Russia’s far east.

“The reinvestments in our portfolio, continuous improvement initiatives and exploration programs have enabled us to add lower cost and lower risk projects that leverage existing infrastructure and enhance our long-term production profile,” Chief Executive Officer J. Paul Rollinson said Tuesday in a statement.

In 2019, 56 per cent of Kinross’ output was generated in the Americas, where it currently has four producing mines: Fort Knox in Alaska, Round Mountain and Bald Mountain in Nevada; and Paracatu in Brazil, its biggest mine by production.

Kinross already operates the Kupol and Dvoinoye mines in Russia. The country accounted for 21 per cent of the company’s metal production last year.

Kinross has two mines in West Africa, including Tasiast in Mauritania, where it’s had a rocky history. The company had taken more than US$5.5 billion in writedowns on the mine, which it acquired as part of its purchase of Red Back Mining Inc. in 2010. Prospects at the mine, though, have increased greatly in the past few years and Rollinson has said Tasiast has the potential to become the global miner’s best asset.