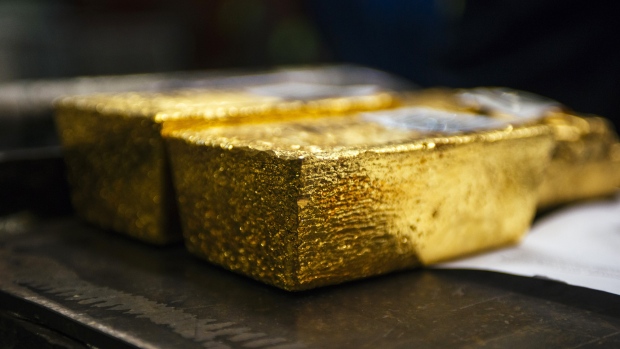 Gold bullion bars sit following casting at the Rand Refinery Ltd. plant in Germiston, South Africa, on Wednesday, Aug. 16. 2017. Established by the Chamber of Mines of South Africa in 1920, Rand Refinery is the largest integrated single-site precious metals refining and smelting complex in the world, according to their website. , Bloomberg

(Bloomberg) -- As investors across all asset classes limp toward the end of 2018, gold is approaching what has been a reliably strong season in recent years.

Since 2013, there’s been a more than 80 percent chance of a positive return in gold prices in January. And in the past two years, the best-performing producers of the precious metal have returned as much as 40 percent during the period, according to National Bank Financial analyst Mike Parkin. The strength is linked to demand from Asia, where giving gold as gifts is customary during the Chinese New Year, he said.

Gold futures have fallen 7.1 percent in 2018, which has proven difficult for investors in every asset class from equities to real estate and government bonds. The $9.2 billion VanEck Vectors Gold Miners ETF is down 16 percent this year, putting it on track for its biggest annual decline since 2015. If history is any guide, both could be poised for a rebound.

In the past 10 years, January through February has been the strongest period for gold prices, and miners have reaped the benefit, according to Bloomberg’s seasonality chart of spot gold and gold-linked ETFs. Since 2009, the spot gold price saw total of 5 percent return in the period, while VanEck Vectors Gold Miners ETF saw 6.1 percent gain.

Gold miners with highest leverage to gold-price changes include New Gold Inc., Kinross Gold Corp., Agnico Eagle Mines Ltd. and Detour Gold Corp., according to Parkin. Looking at their average returns during January and February since 2009, shows that cumulative gain would have been around 35 percent, according to data compiled by Bloomberg.

However, Parkin thinks the best way to play this rally would be to own Agnico Eagle Miners Ltd., Iamgold Corp., Kirkland Lake Gold Ltd. and Yamana Gold Inc.

To contact the reporter on this story: Aoyon Ashraf in Toronto at aashraf7@bloomberg.net

To contact the editors responsible for this story: Courtney Dentch at cdentch1@bloomberg.net, Richard Richtmyer