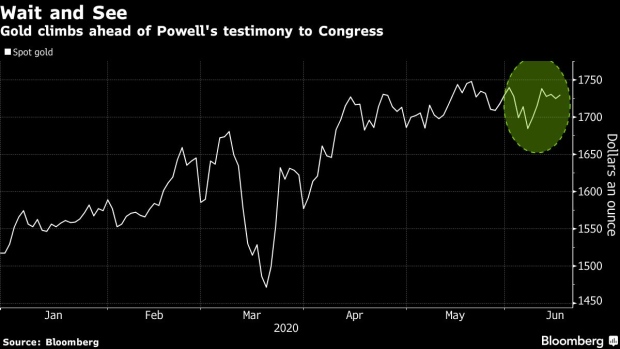 A mark of 999.9 fine sits on hallmarked 12.5 kilogram gold bullion bars stacked at the Valcambi SA precious metal refinery in Lugano, Switzerland, on Monday, April 24, 2018. Gold's haven qualities have come back in focus this year as President Donald Trumps administration picks a series of trade fights with friends and foes, and investors fret about equity market wobbles that started on Wall Street and echoed around the world. Photographer: Bloomberg/Bloomberg , Photographer: Bloomberg/Bloomberg

(Bloomberg) -- Gold pushed higher as investors counted down to testimony from Federal Reserve Chairman Jerome Powell on the central bank’s next steps to combat the hit from the coronavirus pandemic.

Powell, who delivers his semi-annual policy report on Tuesday and Wednesday, is expected to echo the downbeat view he gave June 10 after policy makers signaled rates would probably stay near zero through 2022. Bullion also got a lift from concerns over new outbreaks in the U.S. and a weaker dollar.

Bullion has rallied this year as the pandemic triggered an unprecedented wave of stimulus, bolstering the haven’s appeal. On Monday, gold pared a drop after the Fed said it will begin buying individual corporate bonds, and expanded a lending program. On Tuesday, the Bank of Japan revised the estimated size of its virus-response measures, while the Reserve Bank of Australia said the nation’s economy is likely to need policy support for some time.

“Gold has bounced back today amid a choppy U.S. dollar and as the Fed’s latest measures further highlight commitment by the central bank to take all possible measures,” said Madhavi Mehta, an analyst at Kotak Securities Ltd. “Fed Chairman Powell’s testimony is also likely to reflect the same.”

In addition to monetary easing, governmets around the world have stepped up their fiscal response. In the latest move, the Trump administration is preparing a nearly $1 trillion infrastructure proposal as part of its push to spur the world’s largest economy, according to people familiar with the plan.

“The biggest challenge for gold is whether U.S. and global economies will reimpose lockdowns again if there is a major surge,” said Mehta. “Unless there are fresh restrictions, gold may struggle to build on the upward momentum.”

Separately, investors were tracking events in the Koreas. North Korean state media said Kim Jong Un’s regime is reviewing a plan to send its army into the demilitarized zone separating the country from the south. The announcement follows rising tensions with Seoul.