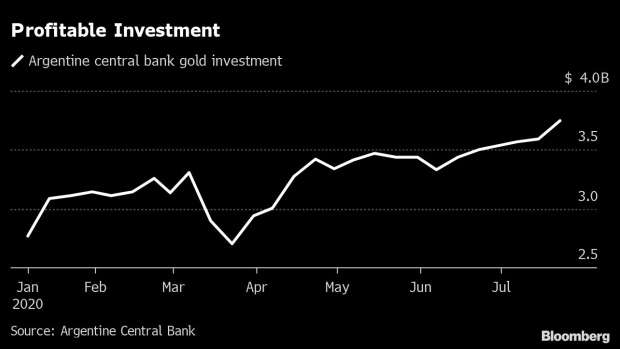 After losing $4 billion from its net reserves since the beginning of the year amid political and economic volatility, an unusually large holding in gold has given Argentina’s central bank balance sheet a boost. Gold represents close to 9% of its total international reserves -- the largest proportion among main central banks in Latin America -- making it a winner from a 30% jump in prices of the precious metal this year.

It’s welcome news as greenbacks have been flowing out of the country’s reserves even amid tight capital controls. Argentina’s net reserves, which excludes foreign obligations, had fallen to $7.8 billion this year, according to calculations from consulting firm Eco Go.

“The drop in net reserves was softened by almost a billion by the rally in gold prices,” said Federico Furiase, director at Eco Go.

Bolivia is another South American country that greatly benefited from the gold rally as it has almost a third of its reserves invested in the metal. On the other end of the spectrum lies Uruguay, whose central bank sold the last of its gold holdings in 2001.