Gold fell as much as 0.5 per cent earlier after Yellen’s said Sunday that a slightly higher interest-rate environment would be a plus for the U.S. and the Federal Reserve. Higher rates diminish demand for the non-interest-bearing metal. The Bloomberg Dollar Spot Index declined 0.3 per cent after dropping 0.5 per cent on Friday.

Gold has been hovering around US$1,900 an ounce amid a debate around price pressures and speculation over whether the Federal Reserve will start talks on tapering its massive bond-buying program. On Friday, bullion jumped after a U.S. report showed job gains in May fell short of estimates, curbing expectations for early monetary tightening.

Gold is taking “a short breather before it makes its next bid for the US$1,900 mark,” Commerzbank AG analyst Carsten Fritsch said in a note. “The environment is conducive to further price rises.” 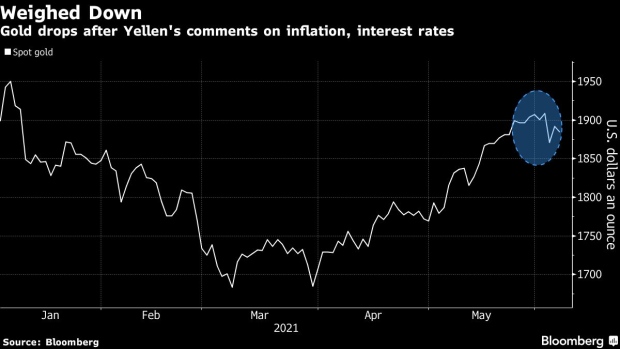 Hedge funds trading the Comex increased their net-long position in the metal for a fifth straight week, according to weekly U.S. government data published Friday.