Is Gold Going to Rise Further?

Gold rebounded, paring a weekly decline as a smaller-than-expected gain in U.S. payrolls helped ease concerns that the Federal Reserve will pull back stimulus.

Payrolls increased by 559,000 last month, according to a Labor Department report Friday. The median estimate in a Bloomberg survey of economists was for a 675,000 rise. The dollar and Treasury yields initially dropped after the report. The weaker dollar also helped copper extend gains on the London Metal Exchange.

Gold has wobbled after jumping the most in 10 months in May on concern that faster economic growth would spur inflation that leads governments and central banks to withdraw support. While U.S. hiring accelerated in May, the gains probably aren’t enough to push the Federal Reserve to alter their policies sooner, said Naeem Aslam, chief market analyst at Ava Trade.

“Today’s number has confirmed the Fed’s current thesis about their monetary policy, and it is very clear that now the pressure is off,” Aslam said in an emailed note. “The fact that the Fed is likely to keep their monetary policy unchanged is helping the gold prices today.” 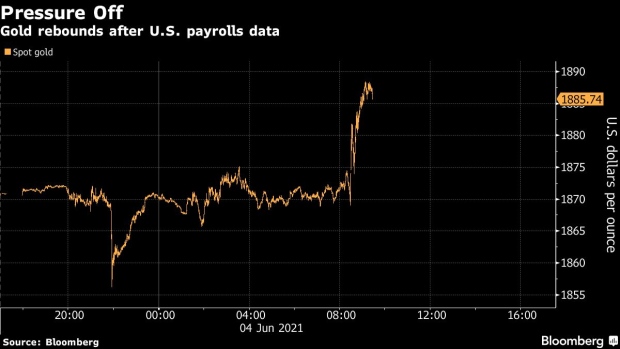 New York Fed President John Williams said Thursday that now is not the time for the U.S. central bank to adjust its bond-buying program, though it makes sense for the officials to be talking through options for the future. That followed comments from his Philadelphia counterpart, Patrick Harker, who said it’s appropriate to “slowly, carefully” move back on purchases at a suitable time.

Spot silver rose, while platinum and palladium fell. The Bloomberg Dollar Spot Index slipped 0.4 per cent after rising 0.7 per cent on Thursday. Copper for three-month delivery on the LME rose 1.8 per cent to US$9,962.50 a ton, while most other main metals traded in London also advanced.