A lot of rate hikes are already priced into gold: VanEck’s Ima Casanova

Futures prices bounced as much as 1.1 per cent on Monday as the dollar declined for a second day, taking some of the strain off the non-interest bearing precious metal after the prospect of a super-sized rate hike helped spark a fifth straight week of losses. 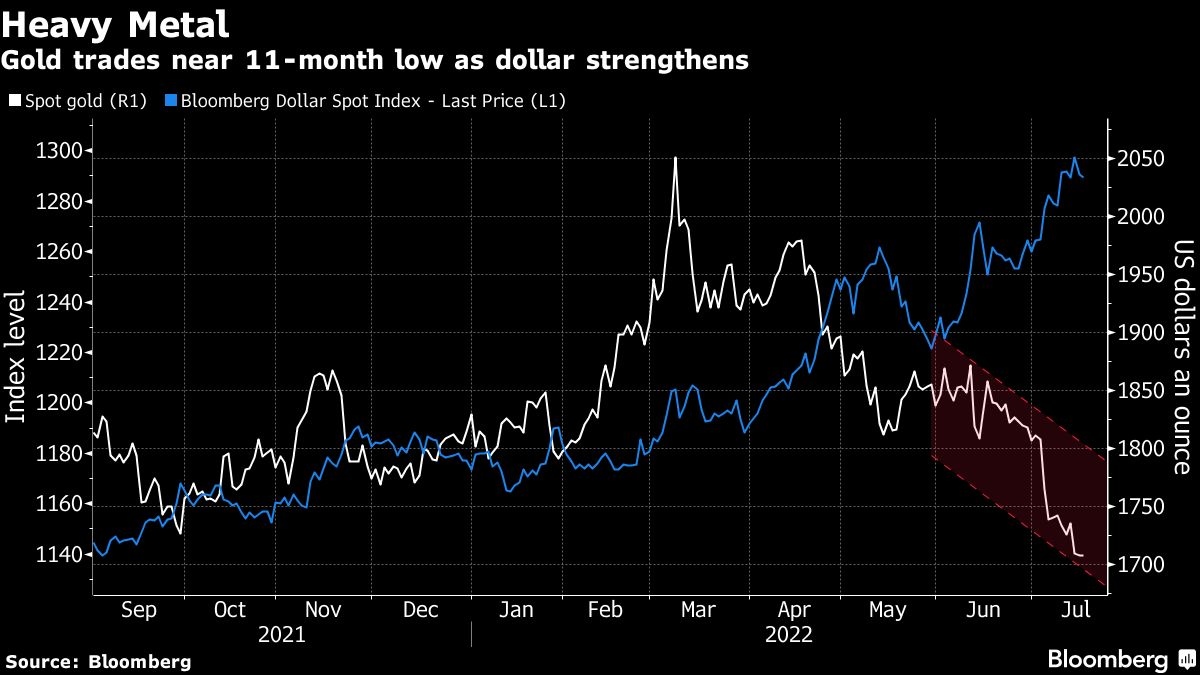 Federal Reserve officials are on track to raise rates by 75 basis points for the second consecutive month when they meet later in July, after policy makers pushed back against a bigger hike. Investors reversed bets on a full percentage-point move after wary comments from officials including Atlanta Fed President Raphael Bostic and St. Louis’s James Bullard, along with a drop in US consumer long-term inflation expectations, which eased some fears that price pressures are becoming entrenched.

Data Friday also showed US retail sales were stronger than expected in June -- underscoring a resilient economy despite tightening monetary policy -- while investors were also weighing China’s pledges to shore up growth. Still, the outlook for the global economy remains cloudy, with the International Monetary Fund saying it will cut its growth outlook “substantially” in its next update, as finance chiefs grapple with a shrinking list of options to address the worsening risks.

“Gold prices are seeing some slight reprieve into today’s session with a lift from the US dollar’s weakness, but prices continue to trade with a downward bias,” said Yeap Jun Rong, market strategist at IG Asia Pte. “We may have to see some signs of ‘peak hawkishness’ kicking in over the coming months, in order for gold to regain some market confidence.”

Spot gold rose slightly to US$1,708.18 an ounce as of 2:59 p.m. in New York. Gold futures for August delivery gained 0.4 per cent to settle at US$1,710.20 an ounce. Prices dipped below US$1,700 last week for the first time since August. The Bloomberg Dollar Spot Index slipped 0.5 per cent after hitting a record last week. Silver, platinum and palladium all advanced.