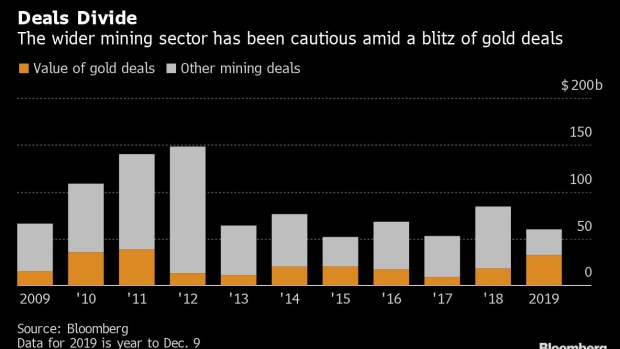 A dump truck travels along a track towards an open pit mine at the Oyu Tolgoi copper-gold mine, jointly owned by Rio Tinto Group's Turquoise Hill Resources Ltd. unit and state-owned Erdenes Oyu Tolgoi LLC, in Khanbogd, the South Gobi desert, Mongolia, on Saturday, Sept. 22, 2018. Mongolia plans to supply the copper-gold mine with energy by the start of 2019, Mongolian Energy Minister Davaasuren Tserenpil said in interview with newspaper Zasgiin Gazariin Medee. The massive copper-and-gold mine was discovered in 2001 and Rio, the world's second-biggest miner, gained control in 2012. Photographer: Taylor Weidman/Bloomberg , Bloomberg

(Bloomberg) -- A torrent of deal-making among gold producers that’s pushed M&A in the sector to an eight-year high is seen spilling over into the wider mining industry -- if there’s a rally in global growth.

Pending and completed gold acquisitions have reached about $33 billion so far in 2019, the highest since 2011, according to data complied by Bloomberg. That’s as deals among all mining companies have declined about 29% from last year to $60 billion, the data show.

A revival in the economic outlook, with higher interest rates and inflation, would prompt other metals producers to rethink their current strategy of cutting debt and lifting shareholder returns -- and focus again on pursuing growth, according to Christopher LaFemina, a New York-based analyst at Jefferies LLC.

“Until now, the market has rewarded companies for austerity” amid a chase for yield, LaFemina said in a phone interview. “We will see a significant acceleration of M&A activity when global growth recovers.”

In recent times, the biggest miners, including Rio Tinto Group and BHP Group, have made only some small investments in undeveloped projects and authorized new spending on expansions at existing operations.

Larger-scale M&A could be an option for Rio next year, UBS Group AG analysts, including Glyn Lawcock, said in a report this month. “Will 2020 see the shackles come off? Growth in the portfolio is limited,” they said.

Rio has a “watching brief for attractive M&A opportunities,” though intends to remain “absolutely disciplined,” Chief Executive Officer Jean-Sebastien Jacques told investors at an October seminar. The company has said its ventures team is evaluating opportunities in battery materials, including in nickel. There would be “plenty of logic” for Rio in adding copper producer First Quantum Minerals Ltd., according to Barclays Plc.

BHP is also seeking to add oil, copper and nickel, and could consider deals that offer an early entry into high-quality resource bases, particularly before the value of a project is fully understood, Chief Financial Officer Peter Beaven said in May.

Still, large companies and their investors continue to be chastened by past failed deals, according to Paul Mitchell, EY’s global mining and metals leader, and they remain cautious after a multi-year effort to repair balance sheets in the wake of the 2015 price collapse.

Sectors such as base metals have fewer opportunities for consolidation than precious metals, and a price downturn hasn’t yet forced companies into distress, according to David Harquail, chief executive officer at Franco-Nevada Corp., a mine streaming and royalty company.

Since January’s $10 billion gold mega-merger between then Newmont Mining Corp. and Goldcorp Inc., companies in the sector including Newcrest Mining Ltd. have added individual mines, while Kirkland Lake Gold Ltd. and Zijin Mining Group Co. acquired smaller rivals. Barrick Gold Corp. and a partner on Tuesday agreed to a $430 million deal to sell a 90% stake in a project in Senegal to with Teranga Gold Corp.

Gold’s rally means there’s been “a slightly improved environment to be able to finally do transactions,” Harquail said. There’s a prospect of further activity among gold producers into next year, with investors ready to back proposals that reduce overheads and combine assets, he said.

“I want to see smart consolidation, not the same thing that we’ve seen in the past” among gold producers, said Joe Foster, a New York-based portfolio manager at Van Eck. “There’s value to be created by consolidating some of these single-asset companies.”

To contact the reporters on this story: David Stringer in Melbourne at dstringer3@bloomberg.net;Danielle Bochove in Toronto at dbochove1@bloomberg.net

To contact the editors responsible for this story: Alexander Kwiatkowski at akwiatkowsk2@bloomberg.net, Keith Gosman, Jake Lloyd-Smith