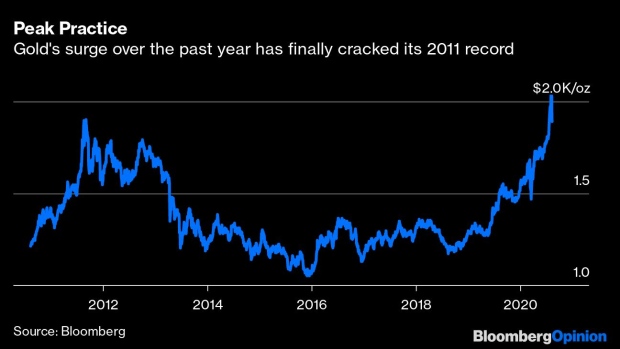 The spot metal fell 5.7% Tuesday, the sharpest drop in seven years and a remarkable slump for an asset that rarely shifts more than a percentage point in a day. It fell further Wednesday, as low as $1,863 an ounce, breaking the back of an extraordinary rally. Since smashing through a long-term ceiling of around $1,350 a troy ounce last June, it had risen to a record of $2,064 an ounce earlier this month.

Despite that, much of the bull run over the past year has been a long overdue correction from depressed levels. Just as gold hasn’t dropped below $1,000 an ounce since 2009, notwithstanding a prolonged slump through most of the decade, once the current volatility has cleared it's unlikely to see the south side of $1,700 again, either.

The reason for this isn't that it’s a hedge against inflation or deflation — those who bought that story when U.S. consumer prices were rising at double-digit rates around gold’s real-term peak in 1980 are still underwater on their investments. The low-inflation conditions of the past decade haven’t been kind to the metal either, at least until recently.

The better explanation is that gold makes up a fairly consistent portion of the world’s portfolio of liquid investments, and much of the recent price spike was just a reversion to the mean.

Add together the market capitalization of the world’s equity markets, the value of global bonds outstanding, and the 42,619 metric tons of private investment gold and you have just shy of $200 trillion of liquid investment assets(1). Over the past five years for which Bloomberg has aggregate bond finance data, gold has made up a remarkably stable share of this pile at around 1.09%, rarely dropping below 1% or above 1.2%.

That’s similar to the sorts of allocations that many money managers would recommend for gold. For all its fake advantages, the metal has one genuinely useful property — its unrivaled ability to move in the opposite direction to equities and bond yields. That negative beta means that a sprinkling of gold in a typical investment portfolio can help smooth out the peaks and troughs in market cycles and achieve a better risk-adjusted return in the long run.

The reason such unchanging allocations can translate into market prices that can jump 50% in just over a year is that the asset classes are so different in scale. Even if players in the $88 trillion equity market and $108 trillion bond market make a modest shift toward metal, the effect of those funds crowding into the $2.8 trillion private investment gold space will be dramatic.

It’s certainly the case that gold at current levels is defying gravity, as with any investment in the grip of speculative momentum. Still, with the metal heading below $1,900 an ounce, we’re already a considerable portion of the way down the slope.

The liquid asset pile has increased by about 6% a year since 2015, and incremental gold demand comes to an extra 1,250 metric tons or so annually. Should gold’s allocation drop back to its long-term average of 1.09% from the current 1.38% share, you’d expect to see reasonable value in the $1,600 range this year and next, rising toward $1,800 by the middle of the decade. With a modest overweighting of 1.15% in light of what’s likely to be a tumultuous couple of years for the world economy, the $1,700 levels around which it traded from April to June would be a solid price floor.

Gold may still fall from its current heights, but it’s probably not got all that much further to go.

(1) We've excluded real estate, which isn't very liquid; most commodities, whose holding costs are too high for them to work as stores of value; and gold held for jewelry, official reserves and industrial purposes, since it's less likely to be liquidated into the private investment market. We've also left off cryptocurrencies, since their $345 billion in market capitalization is still relatively small.