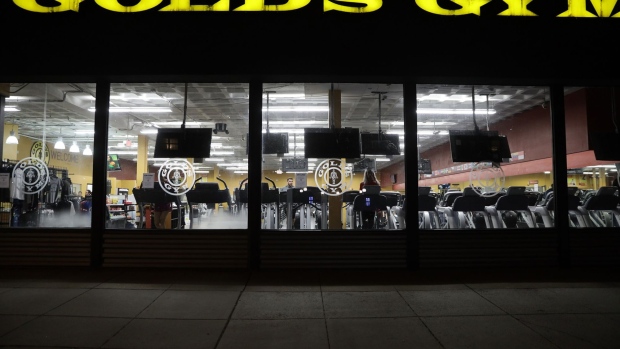 (Bloomberg) -- Gold’s Gym International Inc. sought court protection from its creditors, unable to keep up with debt payments after the prolonged shutdown caused by the coronavirus outbreak.

The gym operator filed for bankruptcy in Dallas, listing as much as $100 million in assets and liabilities, according to court papers. Chapter 11 bankruptcy allows a company to keep operating while it works out a plan to pay lenders and ease its load.

Gold’s blamed the bankruptcy on the pandemic, which forced its fitness studios to shut. A number of gym chains were struggling with onerous debt even before the virus shuttered the global economy.

“This has been a complete and total disruption of every one of our business norms, so we needed to take quick, decisive actions to enable us to get back on track,” the company said in prepared remarks.

Gold’s, which traces its roots back to 1965, began as a gym in Venice, California. It now operates more than 700 gyms around the world, according to its website. Through the bankruptcy process, the company will close about 30 company-owned gyms, mainly in the St. Louis, Alabama and Colorado Springs markets, it said. Gyms owned by franchisees won’t be affected by the restructuring, according to the company’s website.

The company will also try to sell itself under terms proposed by TRT Gym Asset Holdings LLC, according to the court documents. TRT Holdings Inc., the majority shareholder of Gold’s Gym, is in discussions with the company over the terms of a debtor-in-possession and exit loan to get it through the restructuring.

Through its pre-negotiated plan, the company aims to restructure and emerge from bankruptcy by August of this year or sooner. During the bankruptcy, Gold’s will try to reopen gyms closed because of Covid-19, according to the statement.