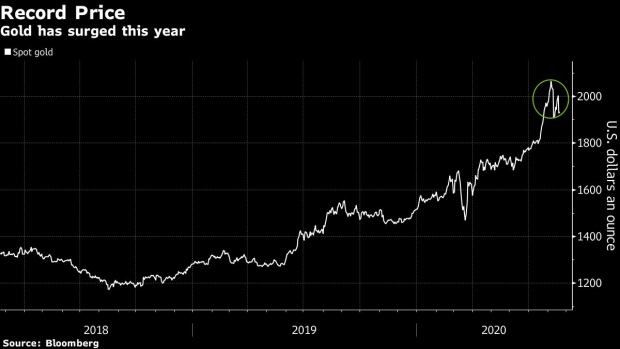 Gold’s rally to a record will make deals in the industry more expensive, according to Gold Fields Ltd. Chief Executive Officer Nick Holland.

Mergers and acquisitions are likely with some bigger producers targeting junior miners, but will become more costly with transactions based around spot prices, Johannesburg-based Gold Fields’s CEO said in an interview with Bloomberg TV. Smaller companies seeking capital to finance projects may see consolidation as the “only way out,” he said.

“At these sort of prices it is very expensive to buy things,” Holland said. “Unless you believe gold is going to stay at current levels or go higher, it would be very hard to make a return.”

Bullion surged to a record of about $2,075 an ounce earlier this month amid massive stimulus measures to help economies recover from the Covid-19 crisis. Prices have since eased, but are still up about 27% this year. While there was a flurry of M&A in the wake of Barrick Gold Corp.’s mega merger with Randgold Resources Ltd. and Newmont Corp.’s acquisition of Goldcorp Inc., deals have slowed as gold powered to an all-time high this year.

With buyers preferring to base deals around conservative prices, “that probably means a whole bunch of deals don’t get done until they really have to,” Holland said.

He added that if deals are done on a share-per-share basis, “you will avoid a lot of these price issues because essentially the acquirer and target have both re-rated.”

“That’s one way of trying to avoid absolute blowout in purchase prices by doing share per share deals,” Holland said.

The CEO expects gold to be volatile and said the company is adjusting its planning price for 2021 and beyond to $1,300 an ounce.