Gold is heading for its fifth weekly loss, the longest streak of such declines in almost four years, with haven credentials sidelined by investors becoming super-bullish on the US dollar.

Bullion has come under relentless pressure in the past month as investors turn to the greenback in the face of an increasingly hawkish Federal Reserve. That trade got another boost this week from soaring US inflation.

“The set-up for a deep liquidation event in gold is building,” Bart Melek, global head of commodity strategy at TD Securities said in an emailed note. “With gold bugs falling like dominoes, prices are now challenging pre-pandemic levels, raising risks that the largest speculative cohort in gold will start to feel the pain under a hawkish Fed regime”

Spot gold slumped below US$1,700 an ounce on Thursday for the first time in almost a year as Bloomberg’s dollar gauge climbed to a record. 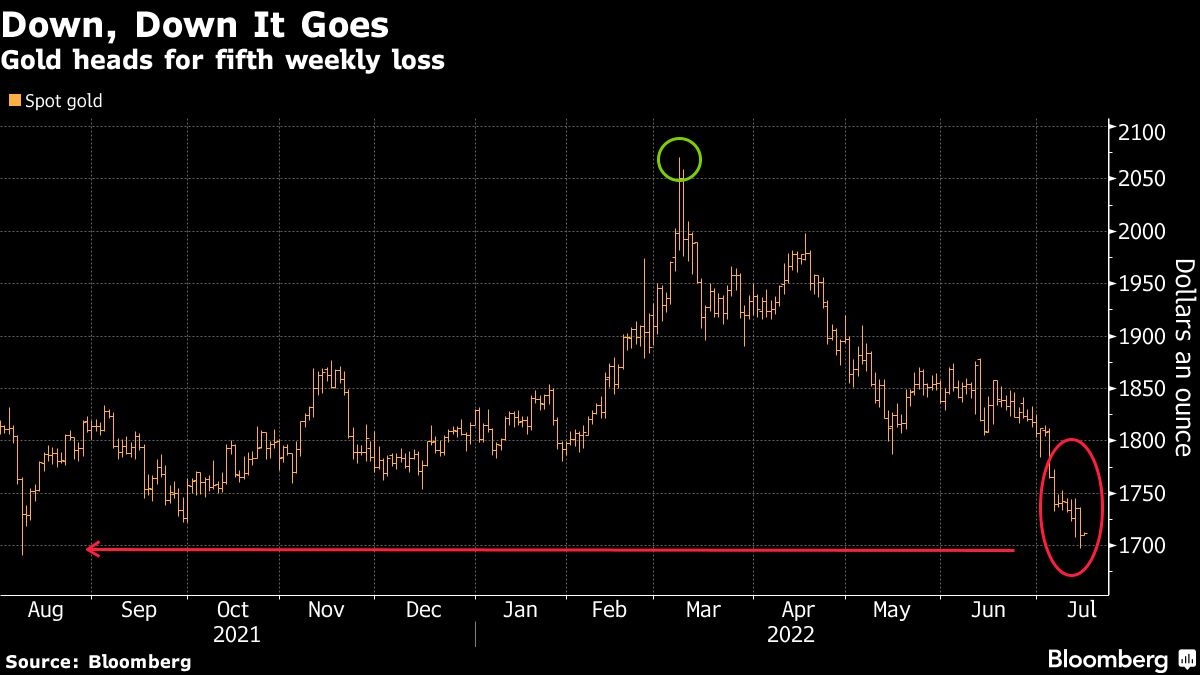 While high inflation and growth threats typically aid gold, the precious metal is wilting as investors weigh the prospect of bigger or more frequent interest-rate hikes from a Fed trying to curb price pressures. Gold doesn’t pay interest, and, like other dollar-denominated commodities, it suffers when the dollar rises.

Still, investors’ expectations of an economic recession in the US should benefit gold as a safe haven, according to Commerzbank AG analysts.

“This is one reason why we anticipate higher prices in the coming months and quarters,” they said in a note. “That said, for this to happen the still strong ETF outflows would need to end and buying interest would need to return to the market.”

This week’s decline extends a tumultuous 2022 for gold, which soared above US$2,000 an ounce after Russia’s attack on Ukraine. It has since cratered as the Fed raised interest rates and the dollar strengthened.