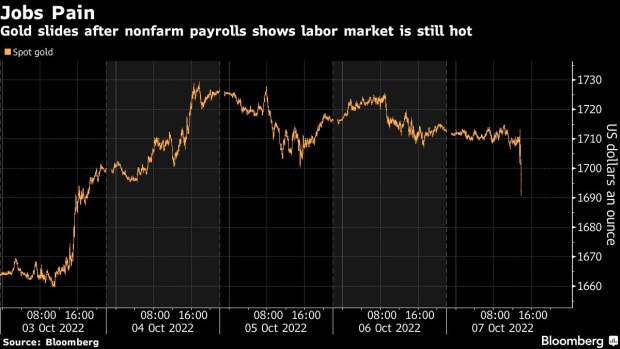 (Bloomberg) -- Gold declined below $1,700 an ounce after US jobs data showed the labor market remains tight, keeping the Federal Reserve on a hawkish policy track.

Nonfarm payrolls rose 263,000 last month, slightly higher than economists’ estimates, while the unemployment rate declined. The dollar and Treasury yields climbed following the data release, putting pressure on gold, which fell as much as 1.3%.

The data will put the Fed on course for another outsize interest-rate hike as it tries to cool the US labor market, which has helped drive inflation to the highest in decades. The central bank’s relentless rate hikes have weighed on gold throughout the year, causing it to slide about 17% from a March-high.

“A solid NFP report kept aggressive tightening by the Fed on the table,” weighing on gold, said Ed Moya, senior market analyst at Oanda. “The economy is not breaking down as fast some traders were anticipating.  If next week’s inflation does not deliver any cool surprises, a Fed pivot seems far away,” he said, adding that bullion is vulnerable to a further slide toward the $1,680 level.  ​

New York Fed President John Williams said interest rates need to rise to around 4.5% over time but the pace and ultimate peak of the tightening campaign will hinge on how the economy performs.

“The timing of that and how high do we have to raise interest rates is going to depend on the data,” Williams said Friday during a moderated discussion organized by SUNY Buffalo in western New York. “Right now the focus is getting inflation back down to 2%.” Williams is vice chair of the rate-setting Federal Open Market Committee and a key member of Chair Jerome Powell’s leadership team.

Weaker data earlier in the week on US manufacturing and job openings fueled expectations that the Fed may slow its aggressive rate hikes, sparking gold’s climb above $1,700. Fed officials have still been insistent inflation remains too high and they won’t be deterred from tightening policy by volatility in the markets.