Crypto is beating gold as 2020’s best asset so far

Gold fell to a two-month low as the dollar extended gains, while investors weighed comments from Federal Reserve officials on the need for more stimulus. Silver plunged after entering a bear market.

Bullion has retreated this week as the Bloomberg Dollar Spot Index climbed two per cent. Hopes of further fiscal stimulus from the U.S. government before a contentious election are fading fast, as congress remains at loggerheads over any potential relief package. Virus cases continued to pickup in several nations, with France and Israel joining Britain in tightening lockdowns that could crimp the nascent economic recovery.

“If global growth concerns continue to push up the U.S. dollar, like we have seen this week, we could see some near‑term headwinds for the precious metal,” Vivek Dhar, a commodities analyst at Commonwealth Bank of Australia, wrote in a note. 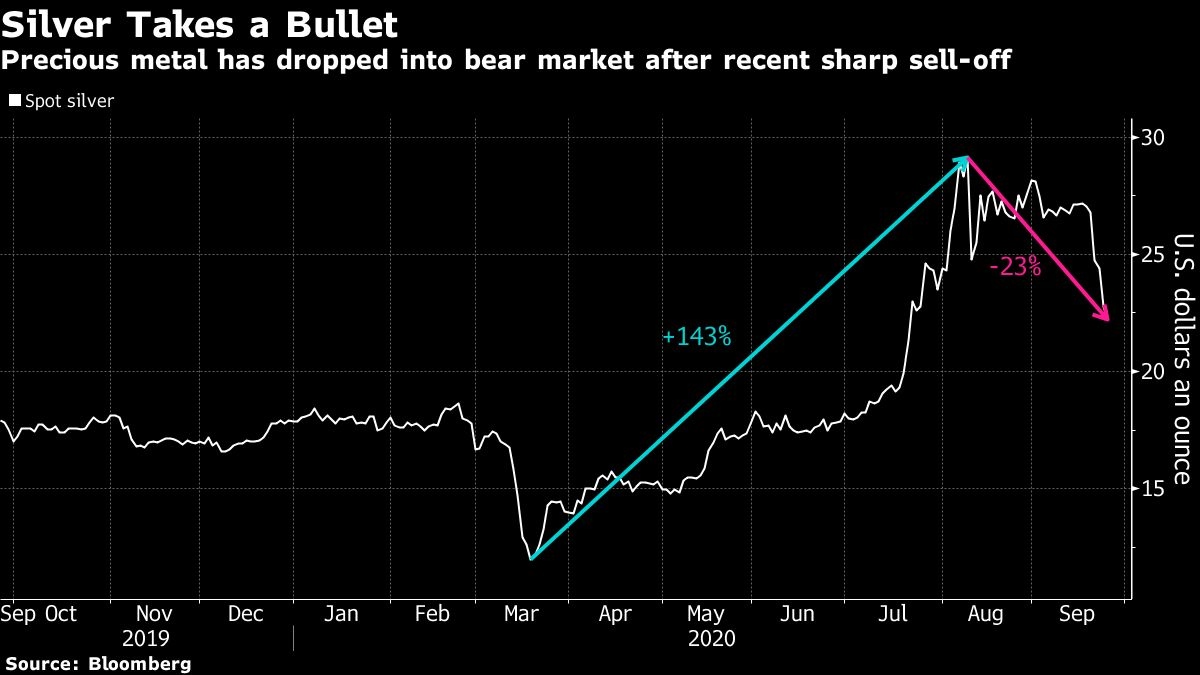 Gold has fallen back after hitting a record in August on massive stimulus programs, negative real rates and a weakening dollar. Morgan Stanley expects the market to remain subdued until 2021, when rising inflation and a weaker U.S. currency could see the precious metal re-test $2,000 an ounce.

Gold’s investment appeal over the summer was burnished as real treasury rates slid deeper into negative territory. Since early August, those rates have been almost flat, and it will take a significant boost to inflation expectations to drive them lower.

“I think it falling back towards US$1,800 an ounce is plausible,” said Marcus Garvey, a strategist at Macquarie Group Ltd. “If you look at gold versus real rates, it had materially out performed.”

Fed officials are sounding the alarm about the U.S. economic recovery. Chairman Jerome Powell told a congressional hearing that more support was likely to be necessary, while others were more full-throated, with Cleveland Fed President Loretta Mester saying it was very much needed given the “deep hole” the economy is climbing out of.

That support looks unlikely to come soon as stimulus talks are pushed to one side by the battle to appoint a new Supreme Court justice, following the death of Ruth Bader Ginsburg.

That’s a prelude to the upcoming presidential election, the biggest event on the precious metals horizon. Tensions continue to rise after President Donald Trump on Wednesday wouldn’t commit to a peaceful transfer of power if a tally of ballots shows victory for Democrat Joe Biden. Increasing political uncertainty will likely boost gold in the short term.