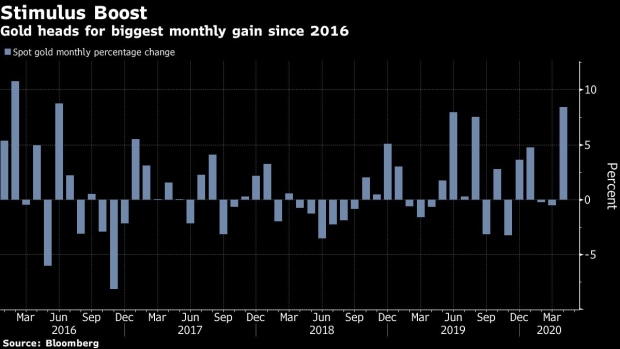 One kilogram fine gold bars sit stacked in the precious metals vault at Pro Aurum KG in Munich, Germany, on Wednesday, July 10, 2019. Gold rose for a third day after the Federal Reserve indicated that it’s preparing to cut interest rates for the first time in a decade as the global economy slows. Photographer: Michaela Handrek-Rehle/Bloomberg , Bloomberg

(Bloomberg) -- Gold is heading for the biggest monthly gain since 2016 as top central banks ramp up stimulus to repair the economic damage inflicted by the coronavirus pandemic, boosting the metal’s allure as a store of value.

Bullion traded near the highest since 2012 after Federal Reserve Chairman Jerome Powell on Wednesday voiced concern the crisis could leave permanent scars on the U.S. economy, while leaving interest rates near zero. Next up, the European Central Bank decides Thursday if more action is needed amid the historic slump. Earlier this week, the Bank of Japan added stimulus.

Gold has rallied in 2020 as investors sought havens amid the economic downturn triggered by the outbreak, with the unprecedented monetary and fiscal stimulus sparking concerns about currency debasement. Worldwide holdings in exchange-traded funds have swelled to a record, aided by forecasts that prices have scope for more gains. Bullion’s advance this month means that it’s risen alongside risk assets including equities.

In his remarks, Powell repeatedly called the policy stance “appropriate,” noting the Fed has promised to keep rates near zero until it is confident the economy is on track to achieve the central bank’s goals of maximum employment and price stability.

Investors were also weighing signs of progress in treating the virus after Gilead Sciences Inc. said its experimental drug helped Covid-19 patients recover faster. The Food and Drug Administration plans to announce emergency use authorization for the drug, the New York Times reported.

In other precious metals, spot silver and platinum have risen in April, while palladium is set for the biggest monthly loss since 2015.