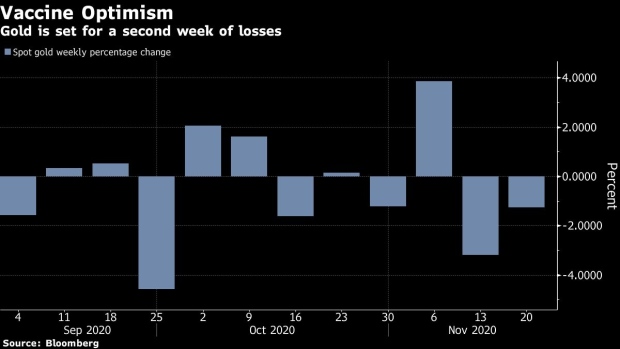 A worker plunges a gold ingot into a cooling bath at the Uralelectromed Copper Refinery, operated by Ural Mining and Metallurgical Co. (UMMC), in Verkhnyaya Pyshma, Russia, on Thursday, July 30, 2020. Gold surged to a fresh record Friday fueled by a weaker dollar and low interest rates. Silver headed for its best month since 1979. Photographer: Andrey Rudakov/Bloomberg , Bloomberg

(Bloomberg) -- Gold steadied after the longest losing run since March, as a sell-off in exchange-traded funds that was triggered by optimism over a coronavirus vaccine continued.

Prices are heading for a second weekly drop and are near the lowest since July following positive news over shots being developed by companies including Pfizer Inc. Global bullion ETF holdings -- which were crucial to gold’s rally to a record in August -- are now at the lowest in more than two months.

While ETF investors have typically tended to take a long-term view of the market, the high cost of rolling futures contracts forward may have brought in more short-term traders, like hedge funds into ETFs, said Marcus Garvey, head of metals and bulks commodity strategy at Macquarie Group Ltd. That has led to more “fast money” in the products, meaning a quicker response to changes in gold’s outlook.

Bullion’s direction is also likely to be driven by worries over surging virus cases around the world and the outlook for stimulus measures. The Trump administration and Federal Reserve publicly disagreed Thursday over whether to extend the central bank’s emergency lending programs.

“Prices have been trapped in the $1,850-to-$1,900 range as vaccine hopes have capped gains made due to a weaker dollar,” said Gnanasekar Thiagarajan, director at Commtrendz Risk Management Services Pvt. Hopes for fresh virus-related stimulus in the U.S. are lending some support to prices, he said.

In other precious metals, Silver rose 0.5%, while platinum and palladium also gained. A gauge of the dollar was little changed.