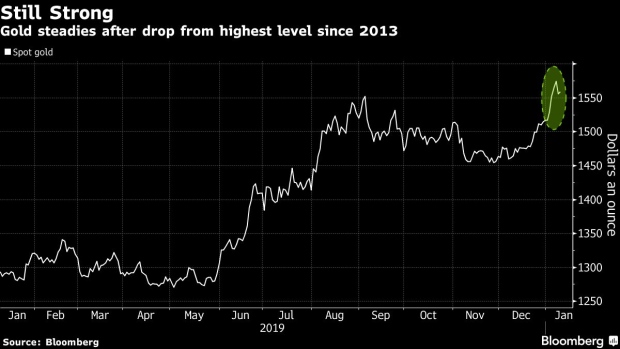 (Bloomberg) -- Gold steadied after posting the biggest decline in two months with the U.S. and Iran appearing to step back from a deeper military conflict, denting the appeal of haven assets for now. Palladium motored to yet another record, extending a meteoric rally.

Bullion ended lower on Wednesday after a retaliatory Iranian missile attack on two U.S. bases in Iraq caused no casualties, allowing President Donald Trump an opportunity to stand down from what had looked like an escalation toward war. Investors are betting that the conflict can be contained.

After the slump, bullion remains higher this year, building on the commodity’s 18% gain in 2019. Investors are weighing lower interest rates that have cut the opportunity cost of holding gold, while trade-war related risks between the U.S. and China still exist as progress beyond any phase-one deal is still in question. There’s also the possibility that Mideast tensions may spike once again.

“Despite falling geopolitical uncertainty, a sense of cautiousness remains in traders’ minds,” CMC Markets Singapore Pte said in a note. “This puts gold in a good position to regain favor should any unexpected event happen.”

Gold investors are also weighing up the outlook for the U.S. economy and whether any change is likely in monetary policy from the Federal Reserve, which cut rates three times in 2019 before pausing. On Friday, traders will get the latest monthly nonfarm jobs report.

Palladium surged to an all-time high of $2,148.81 an ounce, driven by a combination of fundamentals -- strong consumption from carmakers and tight supplies. Prices are up almost 10% this year already. Silver was little changed and platinum added 0.5%.