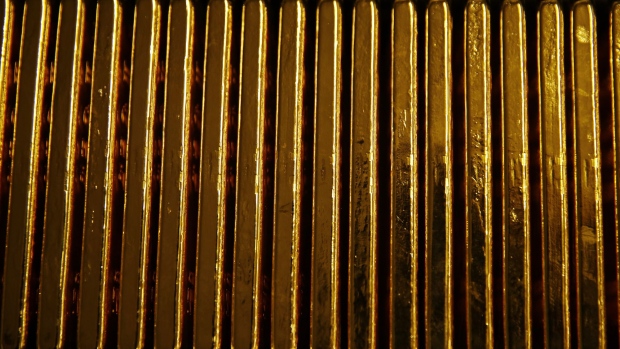 One kilogram bars of gold sit stacked in a row at the Valcambi SA precious metal refinery in Balerna, Switzerland, on Tuesday, April 24, 2018. Bloomberg

Gold surged above US$1,600 an ounce to the highest level in more than six years after Iran attacked two U.S.-Iraqi airbases in its first retaliation against the U.S. killing of a top general last week.

Iran fired a series of rockets at two U.S.-Iraqi airbases early Wednesday morning Baghdad time, the Pentagon said. The Islamic Revolutionary Guard Corps earlier claimed responsibility for the barrage, which the Pentagon said was launched from Iran and targeted the Ayn al-Asad base in western Iraq and another facility in Erbil. It wasn’t immediately clear whether there was major damage or casualties from the attacks.

Bullion’s having a scorching start to the new year, building on 2019’s 18% gain which was the largest annual advance since 2010. Rising demand for haven assets, easier monetary policy by central banks, and slowing global growth were among some of the drivers for gold, even as equities jumped to record highs. Risk sentiment has now been curbed as the the fallout from the killing of of Soleimani is escalating.