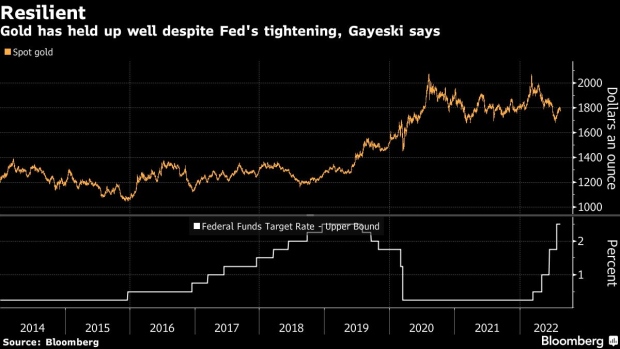 A Pamp SA hallmark sits on Swiss-made one kilogram gold bars on display at the Precious Metals Exchange (SGPMX) at Le Freeport in Singapore, on Tuesday, Sept. 15, 2020. Gold is having trouble building on gains that pushed it to a record $2,075.47 an ounce last month, posting weekly losses in three of the past four weeks. Photographer: Wei Leng Tay/Bloomberg , Bloomberg

(Bloomberg) -- Gold stands to rebound when the Federal Reserve pivots to easier monetary policy after about a year, although prices may drop before that as it goes on shrinking its balance sheet, according to FS Investments.

The FS Chiron Capital Allocation Fund’s bullion exposure may rise from 4% once the Fed begins to ease aggressively, said Troy Gayeski, who joined the Philadelphia-based asset manager as chief market strategist in October. Before that “it’s rational to assume another mild leg down,” he said in an interview.

Gold has dropped about 14% from a near all-time high in March as gains driven by the initial shock of the outbreak of war in Ukraine were undone by the dollar’s ascent to a record and the Fed’s move to raise rates to quell inflation. At the same time, the US central bank has been reducing the balance sheet that ballooned as it went all-out to combat the economic fallout from the pandemic.

“Despite a meteoric run up in the dollar, gold is still trading around $1,800,” said Gayeski, who worked for more than a decade at Anthony Scaramucci’s SkyBridge Capital. “It’s not far below its recent peak, despite Herculean tightening by the Fed, so I think that really bodes well for the next cycle.”

FS Investments, which manages about $35 billion, provides access to alternative sources of income and growth.

The Fed delivered two outsized hikes in June and July totaling 150 basis points -- the steepest since the price-fighting era of Paul Volcker in the 1980s -- sparking concerns of a recession. Chair Jerome Powell said last month the plan to pare the bank’s balance sheet was “picking up steam.” Minutes from the Fed’s meeting last month are due Wednesday, while the next decision on rates comes in September, and follows data that showed a cooling of US inflation.

A Fed pivot would probably be “modest and mild,” said Gayeski. Initially, he expects the Fed to stop hiking and shrinking its balance sheet, then likely start easing in 12 to 18 months.

“The fact that it’s hung in as well as it has, relative to the pace of tightening, really tells us that if there is another leg down, it will be mainly driven by Fed balance sheet reduction, just like other assets,” he said. “The resilience this year has been impressive.”