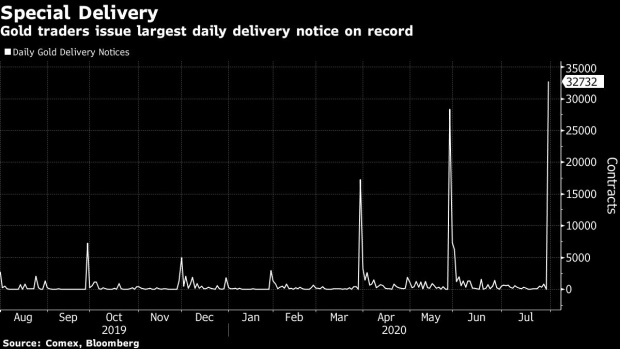 Gold of various weights and sizes sit at Gold Investments Ltd. bullion dealers in this arranged photograph in London, U.K., on Wednesday, July 29, 2020. Gold held its ground after a record-setting rally as investors awaited the outcome of a Federal Reserve meeting amid expectations policy makers will remain dovish, potentially spurring more gains. , Bloomberg

(Bloomberg) -- Traders on the main gold futures exchange in New York have issued the largest daily delivery notice on record.

In the latest sign of how the market’s norms have been upended by the price disconnect that struck in March, traders on Thursday declared their intent to deliver 3.27 million ounces of gold against the August Comex contract, the largest daily notice in bourse data going back to 1994.

While millions of ounces of gold trade on the futures market every day, typically only a tiny fraction of that goes to delivery. But in recent months, huge amounts of bullion have flowed into New York and the Comex has seen record deliveries.

That’s the result of a disconnect between prices in the two main markets, London and New York, that began in March as lockdowns grounded flights and shuttered refineries.

Futures, which typically trade in lockstep with the London spot price, soared to a premium of as much as $70 an ounce. Since then, that premium has been smaller, but there have been regular flare-outs.

In response, arbitragers have shipped precious metals to New York to capture the price differential -- and the result has been much larger than normal deliveries against Comex futures.