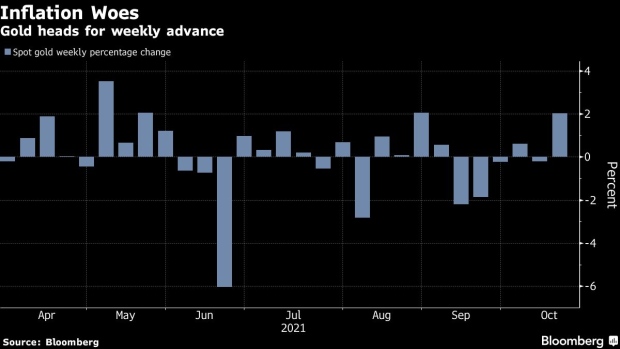 A Suisse hallmark sits on Swiss-made one kilogram gold bars on display at the Precious Metals Exchange (SGPMX) at Le Freeport in Singapore, on Tuesday, Sept. 15, 2020. Gold is having trouble building on gains that pushed it to a record $2,075.47 an ounce last month, posting weekly losses in three of the past four weeks. , Bloomberg

Bullion is still set for its biggest weekly gain since August after receiving a boost from the U.S. consumer price index. The data showed high inflation persisting in the world’s largest economy, causing 10-year Treasury yields to sink as traders considered how the Federal Reserve would react.

“The market, as a snapshot of that, priced in increased stagflation fear,” said Marcus Garvey, head of metals strategy at Macquarie Group Ltd. “That inflation now will bring forward tightening, but the economy won’t handle it, and, therefore, it will be a very limited tightening cycle.”

That’s caused traders in a key corner of the U.S. short-term rates market to bet the Fed will hike faster and more aggressively starting at the end of next year. Whether the central bank takes action to curb inflation at the expense of employment will be crucial to gold’s performance over the next year.

Investors so far remain cautious. Exchange-traded funds are set to cut their gold holdings for a fourth week running, according to an initial tally by Bloomberg. Data on hedge funds Comex futures positioning will be eyed later Friday.

“The gold investment market is still suffering from a hangover from last year,” said Adrian Ash, director of research at brokerage BullionVault. “It was always going to be a hard act to follow.”

Spot gold declined 1.4% to $1,771.60 an ounce at 1:37 p.m. in London, although it’s up 0.9% for the week. The Bloomberg Dollar Spot Index was little changed and is set for its first weekly decline since early September. Silver and platinum declined, while palladium was steady. All are poised for advances this week.