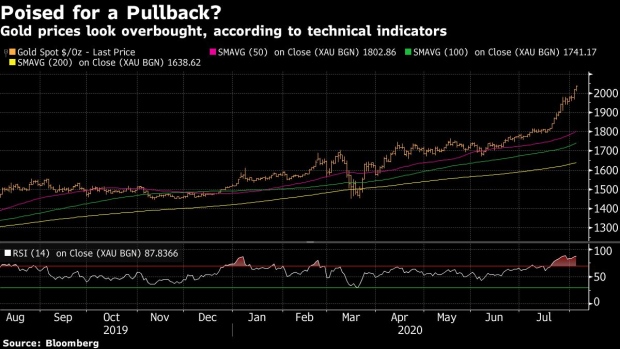 A worker lifts a gold ingot from a cooling bath at the Uralelectromed Copper Refinery, operated by Ural Mining and Metallurgical Co. (UMMC), in Verkhnyaya Pyshma, Russia, on Thursday, July 30, 2020. Gold surged to a fresh record Friday fueled by a weaker dollar and low interest rates. Silver headed for its best month since 1979. Photographer: Andrey Rudakov/Bloomberg , Bloomberg

(Bloomberg) -- Gold and U.S. stocks could part ways during a fresh round of market turbulence, ending a three-month period in which their returns were almost yoked.

Renewed deterioration of the global economy and more lockdowns to prevent Covid-19 from spreading should hit equities but leave gold standing, according to Societe Generale.

“While the correlation between gold and equities has turned unambiguously positive since the March lows in risk assets, another serious bout of risk aversion could cause the performances of equities and gold to diverge,” SocGen strategists including Jitesh Kumar wrote in a note dated Aug. 4, echoing comments from other strategists.

Betting against U.S. equity benchmarks has been a losing battle for months. Going long on a precious metal as it’s flashing overbought signals is a trade only for the bravest. Yet a strategy of underweighting the S&P 500 Index versus the yellow metal is gaining attention.

Accommodative fiscal and monetary conditions will keep gold prices buoyant even if more lockdowns are ordered, SocGen’s strategists said. Jitters about higher corporate or capital-gains taxes in the event that Joe Biden wins the U.S. presidential contest might drive a wedge between the asset classes well before the November vote, the strategists said.

The outperformance of gold has become a lightening-rod for analysts who follow correlations.

“Both long-term and short-term investors are buying gold in unison,” analysts from BCA Research wrote in a report. “This kind of groupthink often leads to a correction in the affected asset.” But if the dollar rebounds and gold retreats, investors should buy the dip, they added.

Technical indicators point to gold’s rally having gone too far, with bullion’s 14-day relative strength index of about 88 currently deep within what many chartists call “overbought” territory.

Gold in the spot market rallied since mid-March as real interest rates fell below zero and investors sought alternative portfolio defenses to bonds. The metal’s almost 11% gain outpaced all other classes last month even as the S&P 500 rallied its best July performance in a decade, according to Bank of America.

“If economic conditions continue to deteriorate and the Fed is forced to seriously consider negative policy rates, the read-across could be negative for equities, especially via the financials channel,” SocGen strategists wrote. “It would be reasonable to expect dips in gold to be bought at the same time by investors in an increasingly uncertain environment.”

At the same time as gold has become more correlated with stocks, it has reprised its past inverse relationship to the U.S. dollar, which had faded earlier in the year.

“But we remain overweight gold -- the most attractive defensive asset given liquidity-induced inflation risks, weaker U.S. dollar expectations, increased geopolitical risks and uncertainty of the pandemic,” he said.