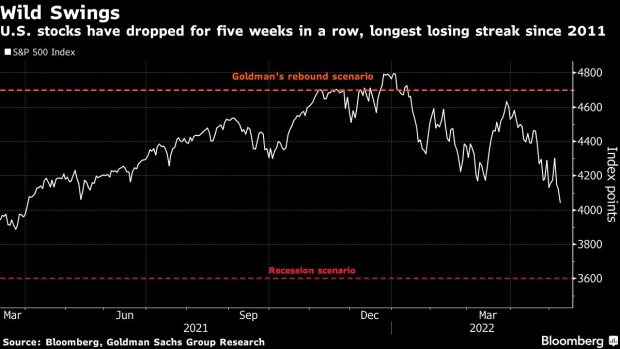 (Bloomberg) -- Wall Street is reluctantly coming to grips with a new reality for 2022: This isn’t going to be a good year for stocks.

The Federal Reserve is in the midst of an aggressive rate hike cycle, which is expected to weigh on U.S. corporate earnings and economic growth. This could chip away at key supports for the stock market after easy monetary policy helped fuel an over 100% increase in the S&P 500 from March 2020 when the pandemic hit through the end of last year.

Even if the U.S. manages to avoid dipping into a recession, stocks look risky, according to Goldman Sachs strategists.

“The best-case scenario for the economy -- and, eventually, for equity prices -- probably involves a continued period of constrained equity market returns,” Goldman strategists led by David Kostin wrote in a note to clients. “Swings will remain large until the path of inflation is clarified.”

To be sure, these predictions aren’t showing up in the banks’ formal projections yet. As of mid-April, the median year-end target for the broad equities benchmark among strategists tracked by Bloomberg was 4,875. The index is currently trading just above 4,000.

Goldman, for example, held its forecast for the S&P 500 at 4,700. So while its forecast implies marginally negative returns in 2022, it would take a 17% gain from current levels to reach its target. That said, the bank’s strategists said an economic contraction could push the S&P down to 3,600.

Strategists at Bank of America also stopped short of lowering their S&P 500 outlook, but said the market selloff has further to run, in a note to clients on Friday. Historically, the broad equities benchmark struggles during the rest of the year when it’s down through April, according to Bank of America Corp. strategist Stephen Suttmeier, who analyzed data going back to 1928, wrote in a note Monday.

Last week, Morgan Stanley’s chief U.S. equity strategist Michael Wilson -- one of Wall Street’s most vocal bears -- told clients that the S&P 500 has minimum downside to 3,800 in the near term, and it could possibly fall as low as 3,460.

Read: Morgan Stanley’s Wilson Says Bulls Have Much ‘Explaining To Do’

That said, not every major Wall Street bank has made this pivot. JPMorgan analysts led by Marko Kolanovic, who have remained bullish as stock have tanked this year, said “the past week’s selloff appears overdone” and maintained their overweight recommendation for developed- and emerging-market stocks.

While Credit Suisse cut its outlook for the S&P 500 to 4,900 from 5,200, it also said the economic landscape remains supportive of corporate profits. The bank’s strategists left their S&P earnings expectations unchanged at $235 in 2022 and $255 in 2023, saying in a note to clients that companies have managed to pass on higher input costs to customers without harming sales.