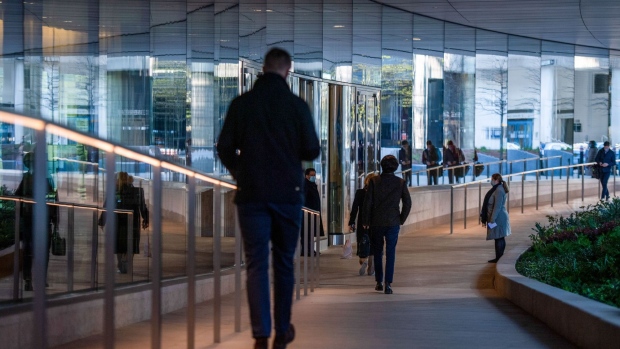 City workers walk with bags of food at lunchtime in the City of London, U.K., on Wednesday, April 7, 2021. Hundreds more JPMorgan Chase & Co. and Goldman Sachs Group Inc. bankers have returned to their London offices since the U.K. government eased its stay at home guidance on March 29. , Bloomberg

(Bloomberg) -- After more than a year of near-empty skyscrapers and virtual conferences, the City of London is hoping the U.K. government’s latest lockdown guidance next week will help kickstart a more widespread return to the office.

Banks including Goldman Sachs Group Inc. and JPMorgan Chase & Co. have told U.K.-based staff that workers should ready themselves for a gradual return to office from later this month. Those plans could change if Prime Minister Boris Johnson announces an extension of the remaining lockdown restrictions in England on Monday.

Even if Johnson unlocks, those hoping for a speedy return to pre-pandemic norms may be disappointed. The scale of any return is unlikely to be consistent across the same firm, let alone the broader industry, according to estimates of foot traffic levels since the onset of the pandemic by data platform Orbital Insight.

If you’re a trader or an investment banker, you’re more likely to soon find yourself commuting in -- if you haven’t already returned. But other areas of finance may stay quieter.

Foot traffic levels in the main London offices of Bank of America Corp., Citigroup Inc., Goldman Sachs Group Inc., JPMorgan Chase & Co. and Morgan Stanley, which have a substantial proportion of traders and investment bankers among their headcount, were estimated on average to be about a fifth of the pre-pandemic norm as of May 24, according to Orbital’s analysis, which monitors activity levels through satellites and mobile phone data.

Traffic at British banks like HSBC Holdings Plc and Standard Chartered Plc, whose buildings have more staff focused on retail operations and head office activities, was less than half that level, according to Orbital.

Spokespeople for the banks declined to comment on the calculations.

Or take Barclays Plc’s two buildings in London’s Canary Wharf district. At the British bank’s headquarters on Churchill Place, footfall was about a tenth of a pre-pandemic baseline in late May, according to Orbital. In the separate building that houses the lender’s investment bank, around a fifth of staff were present.

A Barclays spokesperson said the May data didn’t reflect the current occupancy level in London as the bank’s phased return to the office, especially in the corporate and investment bank, started in June. The lender has also been using back-up premises so some workers usually based in the London offices are currently onsite elsewhere.

“It’s impossible to replicate the buzz of the trading room in one’s home, but there are other roles in finance that require head-down, uninterrupted focus, where employees working from home might fare far better than they had in the office,” said Allison English, deputy chief executive officer of workplace research firm Leesman.

The fact so many areas of finance are well-suited to remote work could have big implications for the myriad businesses that supported the City of London when half-a-million commuters used to flood into the central London district every day. They’re likely to continue to struggle until a broader cross-section of finance return to the office.

The tone from the top may also be driving some of the differences. Goldman Sachs’ London building -- at about a third full -- is the busiest of all the firms in Orbital’s analysis. The firm has been a particularly vocal proponent for a return to the pre-pandemic model with Chief Executive Officer David Solomon calling it “an aberration that we are going to correct as quickly as possible.”

By contrast, executives at British and European banks have typically been more supportive of flexible working for staff. HSBC’s Noel Quinn has promoted hybrid working, Jes Staley said Barclays would avoid a “strict mandate” on any return to the office and Standard Chartered has formalized flexible working arrangements for most of its staff. Retail-focused NatWest Group Plc said it expected just 13% of its staff to work mostly from the office after the pandemic.

“There is a clear contrast emerging in the approach of the U.S. banks compared with the U.K. and Europeans,” said David Harding, a senior associate at consultancy Advanced Workplace Associates. “While the U.S. banks are setting out their tone from the top and proclaiming the value of their in-office culture, there’s more of a mixed view among the U.K. and European banks.”

Such diversity of approaches and attitudes means there’s unlikely to be an industrywide consensus anytime soon around the financial workplaces of the future.

“The finance sector is made up of such a broad range of roles that it wouldn’t be accurate to generalize that the work they do would be better at their homes or in their offices,” said English.