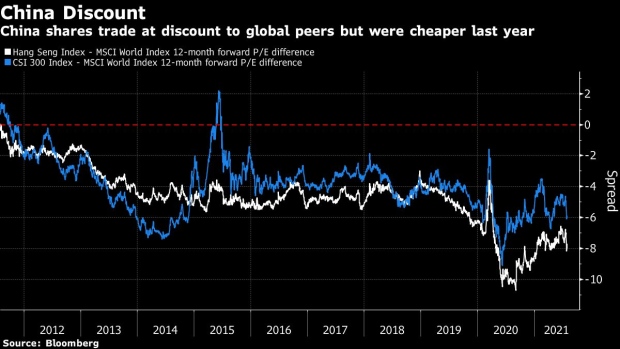 “‘Uninvestable’ has featured in many of our recent conversations with clients regarding investing in Chinese stocks,” the bank’s strategists Kinger Lau and Timothy Moe wrote in a note.

The Chinese market has been in turmoil this week as Beijing intensified a months-long reform effort targeted at private business that regulators blame for increasing inequality and financial risk. While the selloff pushed key stock indexes to the brink of a bear market, prices rebounded on Thursday as authorities and state media stepped in to reassure investors.

Goldman’s strategists cautioned against being too negative on China, saying that the “extreme regulations” in some industries aren’t likely to be expanded across all companies.

They drew a parallel between investor sentiment now and the 2015 market selloff, when China A-shares plunged more than 40%. In that instance, they pointed out that market confidence eventually returned and fund flows had surpassed the previous highs a year later.

Still, it’s too soon to believe that the selling is over, Goldman’s strategists said. The bank cut its recommendation on offshore Chinese equities to market weight from overweight.

“The regulation headwinds will continue to dominate investors’ valuation framework for Chinese stocks,” they wrote. “It seems premature to call for an inflection point.”

Goldman kept its overweight rating on A-shares, saying the stocks can benefit from easier fiscal policy during the second half. A-shares indexes are also more exposed to industries supported by the government, the strategists said.