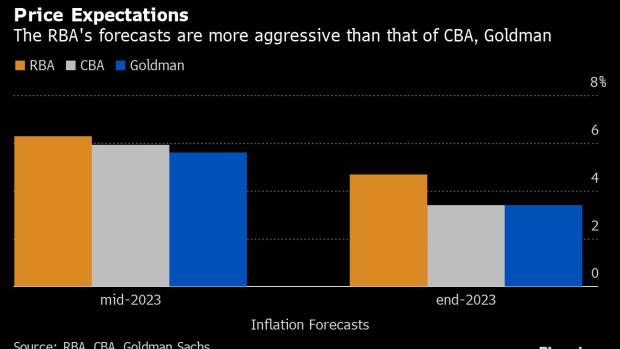 (Bloomberg) -- Commonwealth Bank of Australia, the nation’s largest lender, reckons policy makers in Sydney are near the peak of their tightening cycle, while Goldman Sachs Group Inc. sees interest-rate hikes persisting into 2023.

The diverging views over the terminal cash rate -- CBA has one more hike next week to 3.1% while Goldman predicts five more to 4.1% in May -- highlight contrasting assessments of the capacity of the A$9.7 trillion ($6.5 trillion) housing market to weather the sharpest tightening cycle since 1994.

CBA’s Gareth Aird reckons extending hikes into next year will overburden households already groaning under debt, while Goldman’s Andrew Boak estimates savings built up during the pandemic will see them through.

“The 2023 challenge for Australia is to return inflation to an acceptable level without breaking the housing market and precipitating a recession,” said Boak, chief economist for Australia at Goldman Sachs. Much stronger inflation this year “has narrowed that path to a soft landing.”

Aird, head of Australian Economics at CBA, was among the first to call rate hikes in 2022 -- at a time when the Reserve Bank was still expecting liftoff in 2024 -- and accurately predicted the downshift to quarter percentage-point increments in October. He forecasts headline inflation will ease to 3.4% by the end of next year, from a most-recent quarterly reading of 7.3%

Boak, who forecast the RBA’s initial step up to half-point hikes in June, expects a similar cooling of inflation. Both economists are more optimistic than the RBA, which sees consumer-price growth at 4.7% in a year’s time, well above its 2-3% target range.

Aird says inflation would be even slower if not for the measurement timeframe, arguing a six-month annualized rate would be a better gauge of price growth and would likely be below 3% by the end of 2023.

A key to Aird’s view on a lower terminal rate is “the RBA’s desire to keep the economy ‘on an even keel.’” Lowe has repeatedly said he wants to preserve recent labor market gains -- unemployment is at a 48-year low of 3.4% -- and expressed confidence Australia can pull off a “soft landing.”

That contrasts with his counterparts in Wellington and Washington who are prepared to push their economies into recession to secure low inflation. The difference is the US and New Zealand are experiencing wage breakouts that Australia has so far avoided.

Boak says the RBA can engineer a soft landing even with another 1.25 points of hikes, with unemployment in the low-4% range by mid-2024.

The RBA recently signaled it may pause hikes -- which would be another first -- to assess the impact of tightening. That suggests Aird may prove more accurate. But the bank has also said it sees benefits in drawing out the tightening cycle to keep the fight against inflation front-of-mind for households, suggesting a pause mightn’t be the end of the story.

Then there’s the property market. Data this week backed Aird’s view that households will struggle with further rate hikes. Retail sales dropped for the first time this year in October and he expects a further slowdown as a roll-off of pandemic-era ultra-low fixed rate loans hits consumers.

The RBA is closely monitoring the property market, while reiterating that it’s confident in households’ ability to meet their obligations. Supporting that view, Governor Philip Lowe recently said policy transmission might be slower in the current cycle than the usual 18 months-to-two years.

That’s part of the reason Boak reckons a 15-20% peak-to-trough drop in house prices will be “orderly and manageable,” with only a “few mortgagees” set to drop into negative equity or default.

Boak dismisses fears of a mortgage cliff as households on cheap fixed-rate loans shift over to variable-rate mortgages. He estimates this will only impact about 7% of Australians, while presenting an aggregate 1.5% headwind to household disposable income.

“In context, the latter is a small fraction of the around 20% of household disposable income in excess savings accumulated by households.”