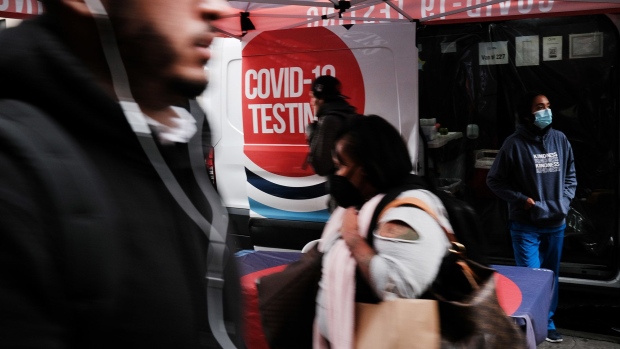 NEW YORK, NEW YORK - OCTOBER 26: A Covid-19 pop-up testing sits stands on a Manhattan street on October 26, 2021 in New York City. Even as New York City's Covid case count continues to fall, many health experts and epidemiologists believe that the city, and much of the world, will be living with Covid-19 long into the future. As people continue to get vaccinated and wear masks in many social settings, experts believe that Covid-19 will be a present but diminished danger for most people. (Photo by Spencer Platt/Getty Images) , Photographer: Spencer Platt/Getty Images North America

(Bloomberg) -- Goldman Sachs Group Inc. economists cut their forecasts for the U.S. economy this year and next after deciding the spread of the omicron strain of the coronavirus would exert a “modest downside” drag on growth.

In a weekend report to clients, economist Joseph Briggs said Goldman Sachs now expects U.S. gross domestic product to expand 3.8% this year, down from 4.2%. It reduced its 2022 estimate to 2.9% from 3.3%.

“While many questions remain unanswered, we now think a modest downside scenario where the virus spreads more quickly but immunity against severe disease is only slightly weakened is most likely,” said Briggs.

The economist said omicron was likely to have only a modest effect on services spending and could exacerbate supply shortages. It could also delay when some people feel comfortable about returning to work, he said.

Briggs saw a mixed effect on inflation. While virus-sensitive sectors such as travel may be hit, further shortages of supplies and labor could push up prices in a more lasting way, he said.