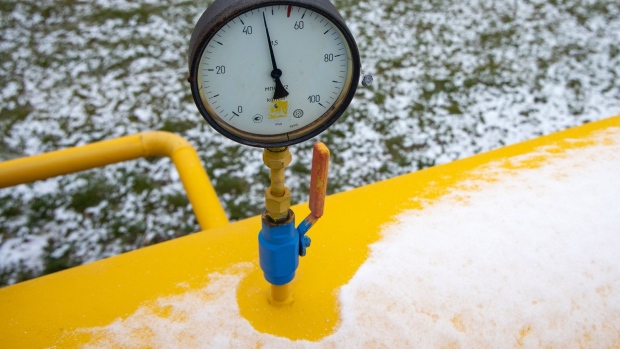 (Bloomberg) -- Oil and gas flows aren’t likely to be significantly impacted from the tensions building in Ukraine, according to Goldman Sachs Group Inc.

The bank’s base case is “no disruption,” Jeff Currie, Goldman’s global head of commodities research, said in a Bloomberg TV interview with Shery Ahn and Paul Allen.

Sanctions or an accident are the two main potential sources of disruption to raw materials markets from Ukraine, he said. A sanctions-driven disruption would be “mutually-assured destruction” as “it’s not in the interest of anybody to stop the flows of energy through Ukraine,” Currie said.

However, there could be some upside for prices, he said. For oil, it’s probably worth about $2 a barrel and for natural gas about $4 per million British thermal unit, he said, adding that grain prices were also worth watching, given that Ukraine is a major exporter of wheat and corn.

See also: What Would War in Ukraine Mean for Europe’s Energy Crisis?

Russian troops have been massing on the border with Ukraine for several weeks and, in the the latest development, U.S. President Joe Biden said he would consider personally sanctioning Vladimir Putin if he orders an invasion. The tensions are already affecting commodity prices, particularly gas, given Russia is the major supplier to Europe. The nation is also a major exporter of oil and a big producer of wheat, aluminum and nickel.

If you did end up seeing some sort of major disruption, the gas market is “extremely tight right now,” Currie said. There is already an energy crisis in Europe, which is part of the reason why Putin is positioning himself over Ukraine, he said. Oil is a little bit different because you can re-direct flows, meaning the main impact will be on freight and tankers, Currie said.