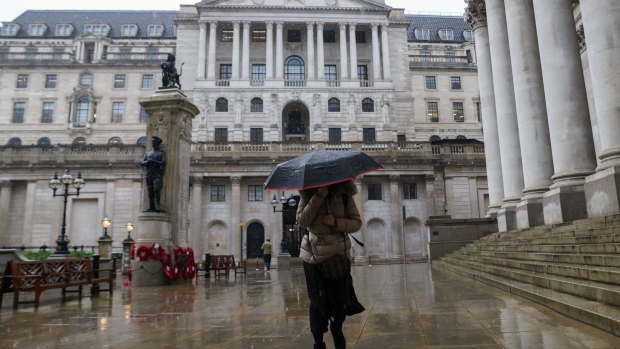 A pedestrian walks past the Bank of England in the City of London, U.K., on Tuesday, Jan. 4, 2022. Bankers in London are expecting to start the year at home after the U.K. government recommended a shift to more remote work on Dec. 8, leaving the city quiet even before the Christmas break. Photographer: Hollie Adams/Bloomberg , Bloomberg

(Bloomberg) -- The Bank of England will raise interest rates three times between February and May to show it’s serious about meetings its inflation target, according to estimates by Goldman Sachs Group Inc. economists.

The Monetary Policy Committee will raise the benchmark rate 25 basis points each time, bringing borrowing costs to 1% by May, the economists wrote in a report released on Friday.

The MPC announces its next rates decision on Feb 3.