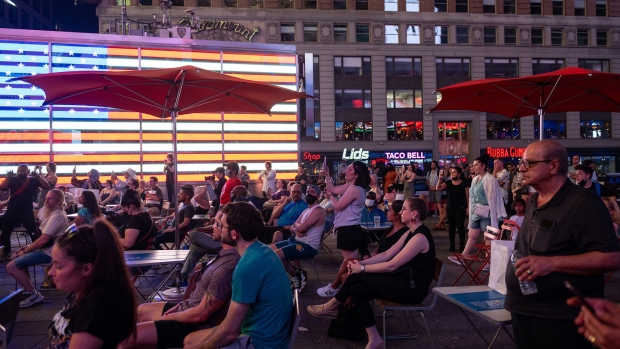 The U.S. bank expects the world’s biggest economy to return to trend-like expansion in the second half of next year. It also cut its forecast for gross domestic product growth in the final two quarters of 2021 by one percentage point to 8.5% and 5% respectively.

“Until a couple of months ago, our GDP growth forecast had been distinguished for the prior year by being well above consensus expectations,” economists led by Jan Hatzius wrote in a report to clients.

“At this point, our forecast is instead distinguished from consensus expectations by the sharpness of the deceleration that we expect over the next year and a half,” they wrote.

That’s mainly due to the continuing spread of coronavirus, which means live entertainment events, amusement parks, or office-based work may take longer than forecast to recover. The increasing level of remote work also doesn’t bode well for the office-adjacent economy and services spending, they wrote.

“It is increasingly clear that while mass vaccination has had a huge impact on service sector activity, it is unrealistic to expect virus fears to instantly disappear entirely,” they said.

The economists cut their consumption growth forecast for the second half of this year, though they maintained their GDP forecast on a yearly basis at 6.6%.